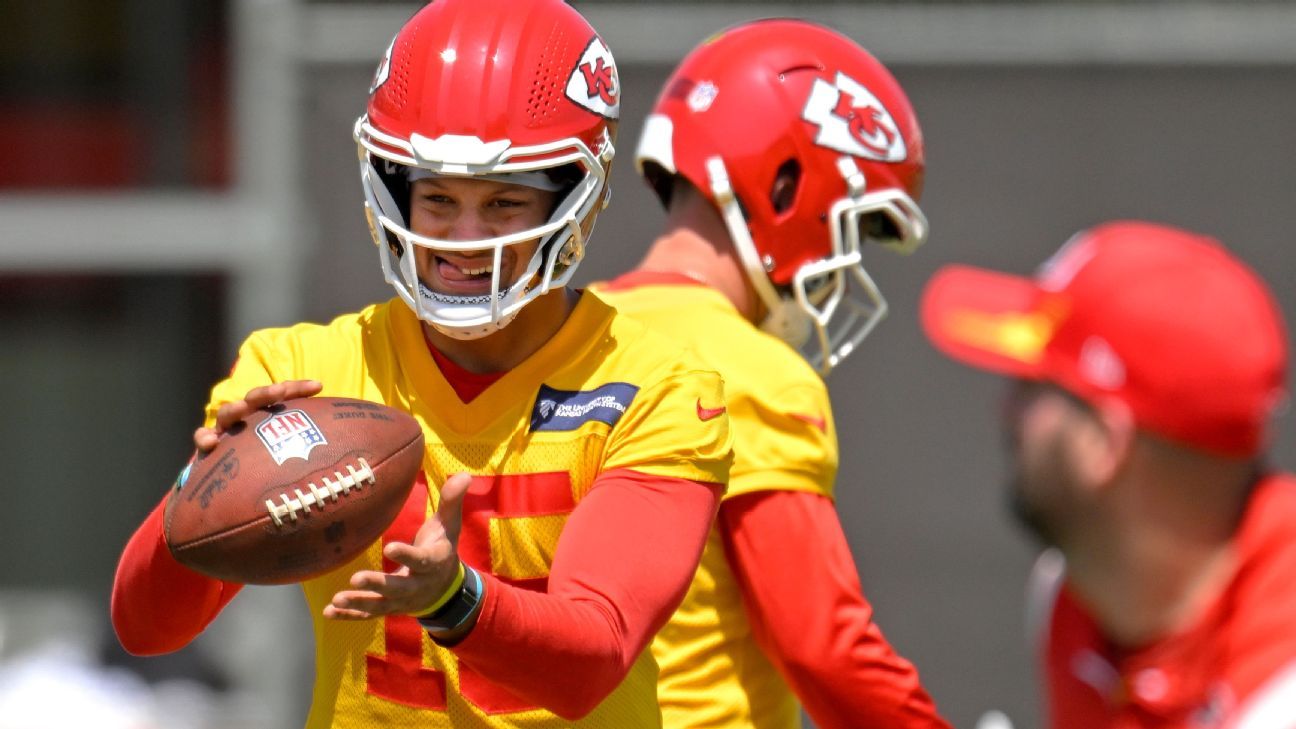 We are officially one month away from the start of the NFL regular season — which kicks off with a Thursday night Buffalo Bills at Los Angeles Rams matchup.

It sure was an active NFL training camp Monday. The Baltimore Ravens activated J.K. Dobbins off of the PUP list and also signed kicker Justin Tucker to a four-year extension, Najee Harris returned to the field for individual drills at Pittsburgh Steelers camp. Patrick Mahomes worked on deep passes, Jalen Hurts connected with A.J. Brown, as did Trevor Lawrence with Christian Kirk.

Teams are preparing as Thursday kicks off this week’s preseason action with two games — the New York Giants at New England Patriots and Tennessee Titans at the Ravens — followed by five games Friday, eight games Saturday and one game Sunday.

Here’s what you need to know from camps across the league.

Jump to:
News | Photos and videos
What our reporters saw

Washington Commanders: Washington tight end John Bates returned to practice after hurting his left calf early in training camp. His presence was noticeable, especially when it came to blocking. With No. 1 tight end Logan Thomas still on the physically unable to perform list, and with rookie Cole Turner nursing a left hamstring injury, Bates’ return was welcomed. He’ll help in the passing game, but he is also a terrific blocker in the run game. That was noticeable on one run during an 11-on-11 drill in which he was matched up vs. end Montez Sweat. Bates kept his feet and body square, then turned Sweat and wrestled him out of the way. It was an impressive block and a sight Washington needed to see. — John Keim

Carolina Panthers: It’s not always a good sign when the general manager talks to a player after practice, particularly amid a report that player is on the trading block. But in this case it was good for quarterback Sam Darnold, who was told by Scott Fitterer “not to worry” about the social media report that surfaced over the weekend. Coach Matt Rhule took it one step further, saying he expects to have three quarterbacks on his final roster, including Darnold and Baker Mayfield, engaged in a battle for the starting job. Rookie Matt Corral likely would be the third over PJ Walker simply because Carolina invested a third-round pick in him. “Of the 32 NFL teams, 12 played one quarterback last year for all 17 regular-season games,” Rhule noted. “I think the average over the last five years is 41 percent, so as much as we’re concerned about the starting quarterback battle, I’m looking at 2.” As for who has an edge for the starting spot, Darnold had a bad interception and Mayfield had three passes batted down at the line on Monday. Both were ineffective in a two-minute drill at the end of practice. — David Newton

Tennessee Titans: The right guard competition between second-year player Dillon Radunz and rookie Nicholas Petit-Frere continues to heat up. The two are alternating reps with the first unit. Petit-Frere had a couple of good battles with outside linebacker Harold Landry III during a pass rush period. The primary difference between Petit-Frere and Radunz is the power at the point of attack that the rookie brings, although Radunz is noticeably bigger than he was last year. That competition will be one to keep an eye on as camp continues. — Turron Davenport

Ready for kickoff? Sign up now to play with friends and family. Get started >>

Atlanta Falcons: The ascent of safety Richie Grant continues to be one of the more interesting things for the Falcons this training camp. Last year’s second-round pick out of UCF, Grant was forced into playing time after corner Isaiah Oliver tore his ACL last season. Now in his natural position at safety, he’s been playing like a clear starter opposite Jaylinn Hawkins, is one of the few players who has stuck with tight end Kyle Pitts and is making more and more plays in practice. On Monday, he picked off Marcus Mariota on a tipped ball — showing good awareness as he caught the ball on the run and kept going. — Michael Rothstein

Kansas City Chiefs: The Chiefs practiced without pads on Monday and at a slower pace than normal which allowed them to work on deep passes. Patrick Mahomes threw several passes down the field. Some went to players in the main wide receiving group, like Mecole Hardman, and some went to those competing for roster spots, like Justin Watson. The idea is to work on timing when there’s no real pass rush or meaningful defensive coverage. — Adam Teicher

Denver Broncos: Broncos coach Nathaniel Hackett would like very much to escape the preseason and training camp without any additional significant injuries. But in his first year with the team, Hackett has consistently said he won’t dial down the competition as part of any risk-reward discussion. That has meant the starters on offense have faced the starters on defense plenty in practices. It also means he has to survive moments like the last play of Monday’s when wide receiver Courtland Sutton leaped over cornerback Ronald Darby — both starters — to make a highlight-worthy grab on a pass from Russell Wilson. Darby stayed down on the field for several moments before telling some of his teammates he had knocked the wind out of himself. But in just few seconds the play highlighted all of the benefits of playing the best against the best in a practice, as well as the risk.

“That’s football, that’s going to happen, you can only control what you can control,” Hackett said. ” … (We’re) trying to protect each other, but at the same time we have to make each other better.” — Jeff Legwold

Green Bay Packers: The last time Jarran Reed remembers being a part of a defensive front as experienced as the one he’s part of in Green Bay was in 2016 with the Seahawks. He was a rookie on a front that featured the likes of Cliff Avril, Michael Bennett and Tony McDaniel. That trio had a combined 25 years of NFL experience and helped the Seattle’s defense rank fifth in the league. He thinks the Packers have something similar going on with their front. Together, Reed, Kenny Clark and Dean Lowry have 18 years of experience. All three entered the NFL in the 2016 draft. It’s one of the reasons Reed signed with the Packers this offseason (one year, $3.25 million). Reed made his presence felt on Monday when during a full-pads practice he stuffed running back AJ Dillon for a tackle for a loss. The Packers finished ninth in defense last year but allowed the third-most yards per rush last year, so those are the kinds of plays they want to see from Reed. — Rob Demovsky

Top NFL news of the day

NFL asks officials to focus on illegal contact fouls: The NFL has asked its on-field officials to pay particular attention to illegal contact fouls during the 2022 season, a league spokesperson confirmed Monday. The request could lead to an increase in such flags following a big drop during the 2021 season. Illegal contact refers to prohibited contact by a defender when the quarterback still has the ball and remains in the pocket. It is a 5-yard penalty and results in an automatic first down.

Baltimore Ravens sign Justin Tucker to extension: Tucker signed a four-year extension with the Ravens on Monday, with a source saying it’s worth $24 million and continues to make Tucker the NFL’s highest-paid kicker. Tucker, the most accurate kicker in NFL history, will earn an average of $6 million per season, the source said, which is $1 million more per season than any other kicker. He had two years left on his current deal, and is now signed through 2027 and will receive signing and option bonuses that total $11.5 million, according to the source. The extension also includes $17.5 million guaranteed, the source said, which is $5 million more than any other kicker.

Josh McDaniels ends speculation over potential Josh Jacobs trade: Las Vegas Raiders first-year coach Josh McDaniels put an end to speculation Monday that former Pro Bowl running back Josh Jacobs was being showcased for a possible trade by playing so many snaps in the team’s preseason opener. “We have a lot of confidence in J.J.,” McDaniels said. “And, you know, he did well with his opportunities, which we hoped he would. “But no, we have no desire to do that at all.” Jacobs, who did not have his fifth-year option picked up by Las Vegas’ new regime of McDaniels and general manager Dave Ziegler, had five carries, gaining 30 yards, and caught two passes totaling 14 yards in the Raiders’ 27-11 Hall of Fame Game victory last week over the Jacksonville Jaguars.

Jets’ Mekhi Becton having MRI on surgically repaired knee: New York Jets right tackle Mekhi Becton is having an MRI on his surgically repaired right knee after limping off the practice field Monday in apparent pain. The injury doesn’t appear serious, according to the Jets, but any time lost is potentially significant because Becton has battled weight and conditioning issues.

A look at Ravens RB J.K. Dobbins (knee), who was just activated off PUP pic.twitter.com/59n8zNBiJk

The audio you’ve all been waiting for…

We asked the guys to finish the lyrics. 🎤🤣 pic.twitter.com/IqKm8UyV8M