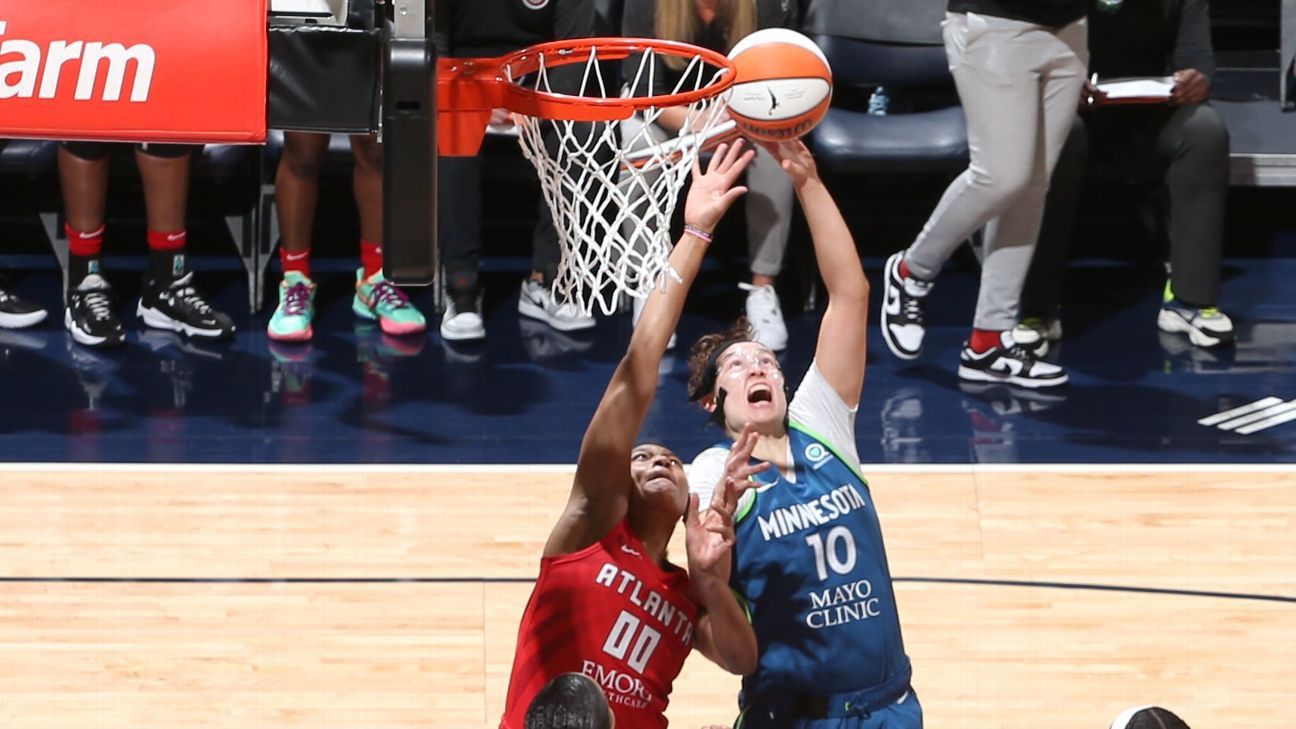 We know this much in the final WNBA Power Rankings of 2022 as the regular season enters its last week: No team has thrown in the towel, even the Indiana Fever, who have long been eliminated from the postseason. Everyone is battling to the very end.

The defending champion Chicago Sky, one of five teams that have already clinched a spot in the playoffs, are back on top of our rankings.

The Dallas Wings were the only team with a perfect record this past week, and they have all but clinched a postseason berth.

Five other teams are still in the running for the playoffs.

One of them is the Minnesota Lynx, who got a big lift on Sunday with the return of Napheesa Collier, back after giving birth to a daughter in May. Minnesota’s victory over the Atlanta Dream helped keep alive the Lynx’s hopes for the playoffs, which they haven’t missed since 2010, when Collier was starting eighth grade.

The Fever have lost 16 games in a row and haven’t won since June 19, but they pushed Dallas to overtime on Saturday. The Wings triumphed in the extra period, and they now have a .500 record. That’s no small accomplishment for Dallas this late in the season.

The franchise has finished at .500 or better just once (2015 in Tulsa) since moving from Detroit after the 2009 season. The team has been in Dallas since 2016 and has reached the playoffs three times but hasn’t won a postseason game.

The Los Angeles Sparks had a grueling four-game Eastern time zone road swing this past week and had lost six games in row. But the Sparks somehow managed to get a win at the Washington Mystics on Sunday to keep their playoff hopes alive.

Teams are still playing for home-court advantage in the postseason, and many of the individual awards are likely yet to be decided in voters’ minds. It all will make for an intriguing final week before the regular season ends Sunday and the playoffs, which feature eight teams, begin Aug. 17.

Candace Parker drops 18 points and two blocks to become the fifth WNBA player to reach 600 blocks in the Sky’s victory over the Sun.

The Sky have the league’s best overall and home record, but they lost just their fourth game this season at Wintrust Arena on Tuesday, falling to Dallas. One of those home losses was to Las Vegas on July 26 in the Commissioner’s Cup final, which doesn’t count in the standings but contributed to the Sky dropping to second last week. However, they followed the loss to the Wings with victories over Washington and Connecticut. Chicago now has won six in a row against the Sun dating back to last year’s playoffs. Chicago is in the driver’s seat to clinch home-court advantage throughout the upcoming playoffs but needs to finish strong.

This week: vs. Seattle (Tuesday), at Las Vegas (Thursday), at Phoenix (Sunday)

The Aces finished a challenging road swing with a win over Seattle on Sunday that kept them in second place in the WNBA standings and our Power Rankings. It was the last of five consecutive away games for Las Vegas, and it followed losses at Washington and Dallas this past week. The defeat against the Wings really stung, as the Aces had a chance to tie the score and send the game to overtime on an A’ja Wilson layup attempt that she probably would make 99 out of 100 times. But this one missed. How did Wilson react? She had 29 points and six rebounds to beat the Storm, providing more fuel for her MVP candidacy. The Aces now finish at home.

This week: vs. Atlanta (Tuesday), vs. Chicago (Thursday), vs. Seattle (Sunday)

The Sun are 8-3 since the All-Star Game, with the only defeats coming to Las Vegas and Chicago (twice). Both those losses to the Sky were by just three points, including Sunday’s defeat. The Sun started this past week with strong back-to-back wins over Phoenix, and now they will head to the West Coast for a back-to-back with the Sparks.

It was a very sentimental week in Seattle. Former Storm legend Lauren Jackson was in the house on Wednesday to see a win over Minnesota, and a franchise-record sellout of 18,100 was there on Sunday for Sue Bird’s final regular-season home game, a loss to Las Vegas. We mentioned Wilson’s MVP candidacy; Seattle’s Breanna Stewart is still going strong there too, as she had a combined 68 points and 18 rebounds in the two games. Jewell Loyd struggled against the Aces (0-of-6 from the field), but she knows what it will take for a strong Storm finish, and odds are she will help provide that.

This week: at Chicago (Tuesday), at Minnesota (Friday), at Las Vegas (Sunday)

Jordin Canada blocks the last-second heave, but a foul is called, then later waved off by the refs to end the game.

What started as a very good week with a 10-point win over Las Vegas ended on a sour note in a loss to struggling Los Angeles, with a defeat at Chicago in between. Mystics guard Natasha Cloud appeared to be fouled on a 3-point attempt with about two-tenths of a second left against the Sparks on Sunday, and it would have sent her to the line with a chance to tie the score. No foul was called, and Cloud let out her frustration on social media by calling the officials “trash” and telling the league to fine her. That seems sure to happen. And if the Mystics look at their 38.5% shooting overall, including 3-of-15 from 3-point range, it’s hard to just blame officiating, even if some calls might have been wrong. Finishing with back-to-back games against the last-place Fever could ease the Mystics’ irritation.

This week: at Indiana (Friday), vs. Indiana (Sunday)

Teaira McCowan drops in an OT bucket for the Wings

We wrote a week ago about the Wings just treading water, but that has changed. They took flight with wins over Chicago, Las Vegas and Indiana. In the first two contests, Dallas star Arike Ogunbowale was sidelined with an ankle injury. And the Wings finished off the third game with her having to leave the court after 25 minutes due to a hip injury. Center Teaira McCowan has come into her own, getting double-doubles in her past five games. Guard Marina Mabrey also had a big week, averaging 19.7 points and 5.0 assists in those three games. We will see how long Ogunbowale is sidelined; she is out for Monday’s game.

It was an emotionally tough week for Phoenix that ended on a good note. The Mercury had back-to-back losses at Connecticut; before the second game, they watched the distressing nine-year jail sentence given to teammate Brittney Griner on a live stream from Russia. But then they returned to their favorite place — Footprint Center in downtown Phoenix — where even without Skylar Diggins-Smith (illness) and Diana Taurasi (quad injury) they beat New York. The Mercury finish the regular season with three more games at home, which should help them.

This week: vs. Minnesota (Wednesday), vs. Dallas (Friday), vs. Chicago (Sunday)

Cheyenne Parker gets the tough and-1 bucket for the Dream.

Atlanta righted the ship by going 2-1 this past week after four consecutive losses, getting wins over Indiana and Los Angeles before falling at Minnesota. Injuries keep whittling away at the Dream. But they have been able to count on Rhyne Howard all season, while fellow rookie Naz Hillmon has come on in recent weeks. Now, can they secure a playoff spot?

The Lynx have won three of their past four — after losing four of their previous five. So, yeah, it has been peaks and valleys for Minnesota. Collier returning this season is an emotional lift. Can the Lynx now close with a surge to get center Sylvia Fowles into the playoffs one more time?

This week: at Phoenix (Wednesday), vs. Seattle (Friday), at Connecticut (Sunday)

There are a lot of ways for voters to look at the WNBA’s Most Improved Player Award, but the Liberty’s Sabrina Ionescu is definitely a strong candidate. The 2020 winner of that honor, Betnijah Laney, returned to action on Saturday for New York after being out since May due to knee surgery. Both Ionescu and Laney were visibly bummed after Saturday’s 14-point loss at Phoenix, which came after two wins over Los Angeles. But New York still has its playoff hopes in its hands with four remaining games against teams also striving for the final postseason spots.

This week: at Dallas (Monday), at Dallas (Wednesday), at Atlanta (Friday), vs. Atlanta (Sunday)

Just when it looked as if the Sparks were going to fade into the sunset after another challenging season, they grabbed a potential playoff lifeline by beating the Mystics on Sunday. Can Los Angeles close the season with three victories at home to push for the postseason? They do have a three-game winning streak earlier this season, so it’s not impossible.

This isn’t an empty platitude: Give the Fever credit for how hard they keep competing — which isn’t easy when you’re only playing for pride and your last win is so far in the rearview mirror. With just two games left, Indiana’s losing streak could finish at 18 in a row. But that won’t be the record for the WNBA’s longest (20 by the Tulsa Shock in 2011).