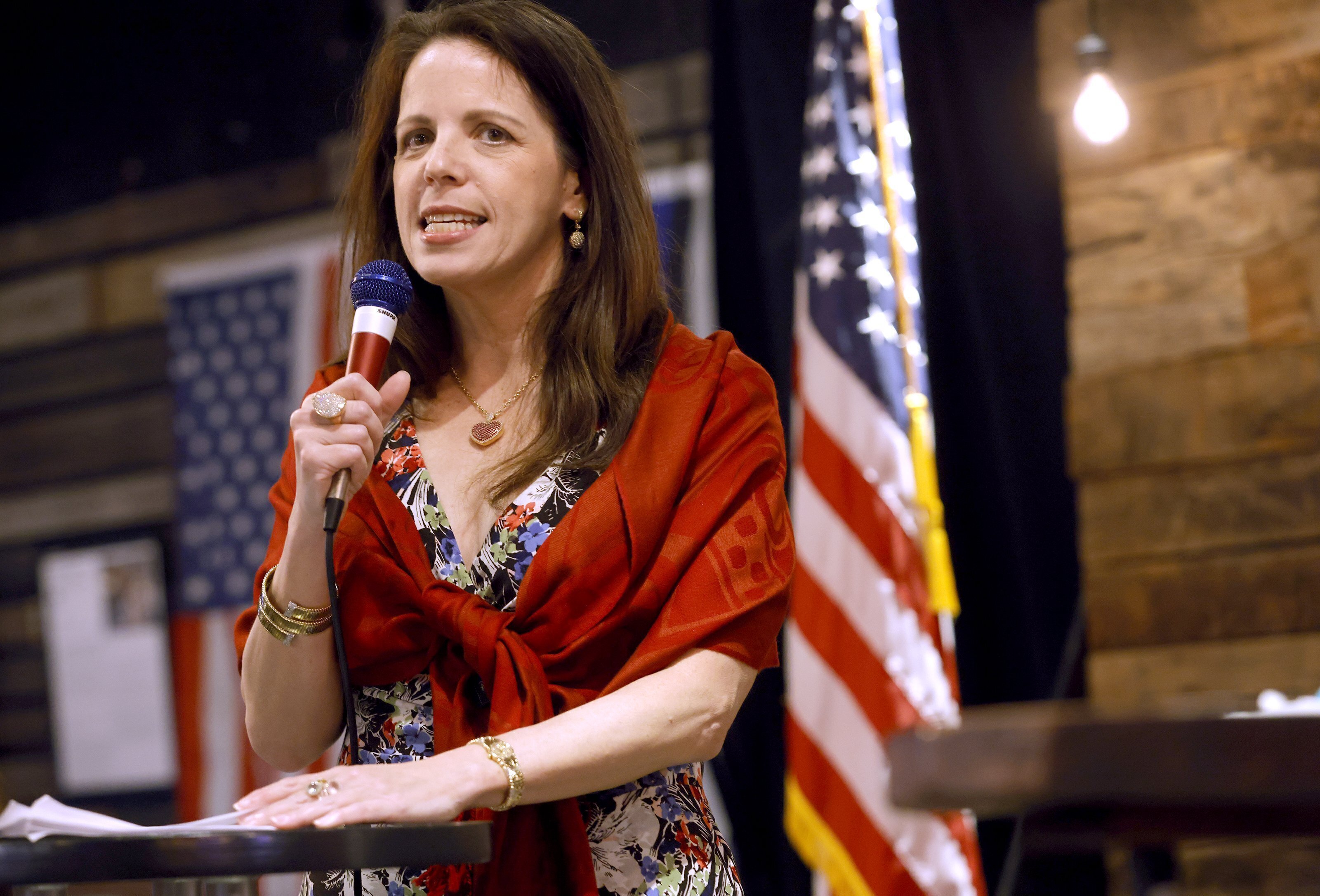 Facing prison time and dire personal consequences for storming the U.S. Capitol, some Jan. 6 defendants are trying to profit from their participation in the deadly riot, using it as a platform to drum up cash, promote business endeavors and boost social media profiles.

A Nevada man jailed on riot charges asked his mother to contact publishers for a book he was writing about “the Capitol incident.” A rioter from Washington state helped his father hawk clothes and other merchandise bearing slogans such as “Our House” and images of the Capitol building. A Virginia man released a rap album with riot-themed songs and a cover photograph of him sitting on a police vehicle outside the Capitol on Jan. 6, 2021.

Those actions are sometimes complicating matters for defendants when they face judges at sentencing as prosecutors point to the profit-chasing activities in seeking tougher punishments. The Justice Department, in some instances, is trying to claw back money that rioters have made off the insurrection.

In one case, federal authorities have seized tens of thousands of dollars from a defendant who sold his footage from Jan. 6. In another case, a Florida man’s plea deal allows the U.S. government to collect profits from any book he gets published over the next five years. And prosecutors want a Maine man who raised more than $20,000 from supporters to surrender some of the money because a taxpayer-funded public defender is representing him.

Many rioters have paid a steep personal price for their actions on Jan. 6. At sentencing, rioters often ask for leniency on the grounds that they already have experienced severe consequences for their crimes.

They lost jobs or entire careers. Marriages fell apart. Friends and relatives shunned them or even reported them to the FBI. Strangers have sent them hate mail and online threats. And they have racked up expensive legal bills to defend themselves against federal charges ranging from misdemeanors to serious felonies.

Websites and crowdfunding platforms set up to collect donations for Capitol riot defendants try to portray them as mistreated patriots or even political prisoners.

Before sentencing Gold to two months behind bars, U.S. District Judge Christopher Cooper called it “unseemly” that her nonprofit invoked the Capitol riot to raise money that also paid for her salary. Prosecutors said in court papers that it “beggars belief” that she incurred anywhere close to $430,000 in legal costs for her misdemeanor case.

Another rioter, a New Jersey gym owner who punched a police officer during the siege, raised more than $30,000 in online donations for a “Patriot Relief Fund” to cover his mortgage payments and other monthly bills. Prosecutors cited the fund in recommending a fine for Scott Fairlamb, who is serving a prison sentence of more than three years.

“Fairlamb should not be able to ‘capitalize’ on his participation in the Capitol breach in this way,” Justice Department lawyers wrote.

Robert Palmer, a Florida man who attacked police officers at the Capitol, asked a friend to create a crowdfunding campaign for him online after he pleaded guilty. After seeing the campaign to “Help Patriot Rob,” a probation officer calculating a sentencing recommendation for Palmer didn’t give him credit for accepting responsibility for his conduct. Palmer conceded that a post for the campaign falsely portrayed his conduct on Jan. 6. Acceptance of responsibility can help shave months or even years off a sentence.

“When you threw the fire extinguisher and the plank at the police officers, were you acting in self-defense?” asked U.S. District Judge Tanya Chutkan.

“No, ma’am, I was not,” Palmer said before the judge sentenced him to more than five years in prison.

A group calling itself the Patriot Freedom Project says it has raised more than $1 million in contributions and paid more than $665,000 in grants and legal fees for families of Capitol riot defendants.

In April, a New Jersey-based foundation associated with the group filed an IRS application for tax-exempt status. As of early August, an IRS database doesn’t list the foundation as a tax-exempt organization. The Hughes Foundation’s IRS application says its funds “principally” will benefit families of Jan. 6 defendants, with about 60% of the donated money going to foundation activities. The rest will cover management and fundraising expenses, including salaries, it adds.

Rioters have found other ways to enrich or promote themselves.

Jeremy Grace, who was sentenced to three weeks in jail for entering the Capitol, tried to profit off his participation by helping his dad sell T-shirts, baseball caps, water bottles, decals and other gear with phrases such as “Our House” and “Back the Blue” and images of the Capitol, prosecutors said.

Prosecutors said Grace’s “audacity” to sell “Back the Blue” paraphernalia is “especially disturbing” because he watched other rioters confront police officers on Jan. 6. A defense lawyer, however, said Grace didn’t break any laws or earn any profits by helping his father sell the merchandise.

Federal authorities seized more than $62,000 from a bank account belonging to riot defendant John Earle Sullivan, a Utah man who earned more than $90,000 from selling his Jan. 6 video footage to at least six companies. Sullivan’s lawyer argued authorities had no right to seize the money.

Richard “Bigo” Barnett, an Arkansas man photographed propping his feet up on a desk in the office of House Speaker Nancy Pelosi, D-Calif., has charged donors $100 for photos of him with his feet on a desk while under house arrest. Defense lawyer Joseph McBride said prosecutors have “zero grounds” to prevent Barnett from raising money for his defense before a December trial date.

“Unlike the government, Mr. Barnett does not have the American Taxpayer footing the bill for his legal case,” McBride wrote in a court filing.

Texas real estate agent Jennifer Leigh Ryan promoted her business on social media during and after the riot, boasting that she was “becoming famous.” In messages sent after Jan. 6, Ryan “contemplated the business she needed to prepare for as a result of the publicity she received from joining the mob at the Capitol,” prosecutors said in court documents.

Prosecutors cited the social media activity of Treniss Evans III in recommending a two-month jail term for the Texas man, who drank a shot of whiskey in a congressional conference room on Jan. 6. Evans has “aggressively exploited” his presence at the Capitol to expand his social media following on Gettr, a social media site founded by a former Trump adviser, prosecutors wrote before Evans’ sentencing, scheduled for this coming Tuesday,

A few rioters are writing books about the mob’s attack or have marketed videos that they shot during the riot.

A unique provision in Adam Johnson’s plea agreement allows the U.S. government to collect profits from any book he gets published over the next five years. Images of Johnson posing for photographs with Pelosi’s podium went viral after the riot. Prosecutors said they insisted on the provision after learning that Johnson intends to write a memoir “of some sort.”

Ronald Sandlin, a Nevada man charged with assaulting officers near doors to the Senate gallery, posted on Facebook that he was “working out a Netflix deal” to sell riot video footage. Later, in a call from jail, Sandlin told his mother that he had met with right-wing author and filmmaker Dinesh D’Souza and was in contact with podcaster Joe Rogan. He also asked his mom to contact publishers for the book he was writing about the “Capitol incident,” prosecutors said.

“I hope to turn it into movie,” Sandlin wrote in a March 2021 text message. “I plan on having Leonardo DiCaprio play me,” he wrote, adding a smiley face emoji.

Sign up for the Fortune Features email list so you don’t miss our biggest features, exclusive interviews, and investigations.