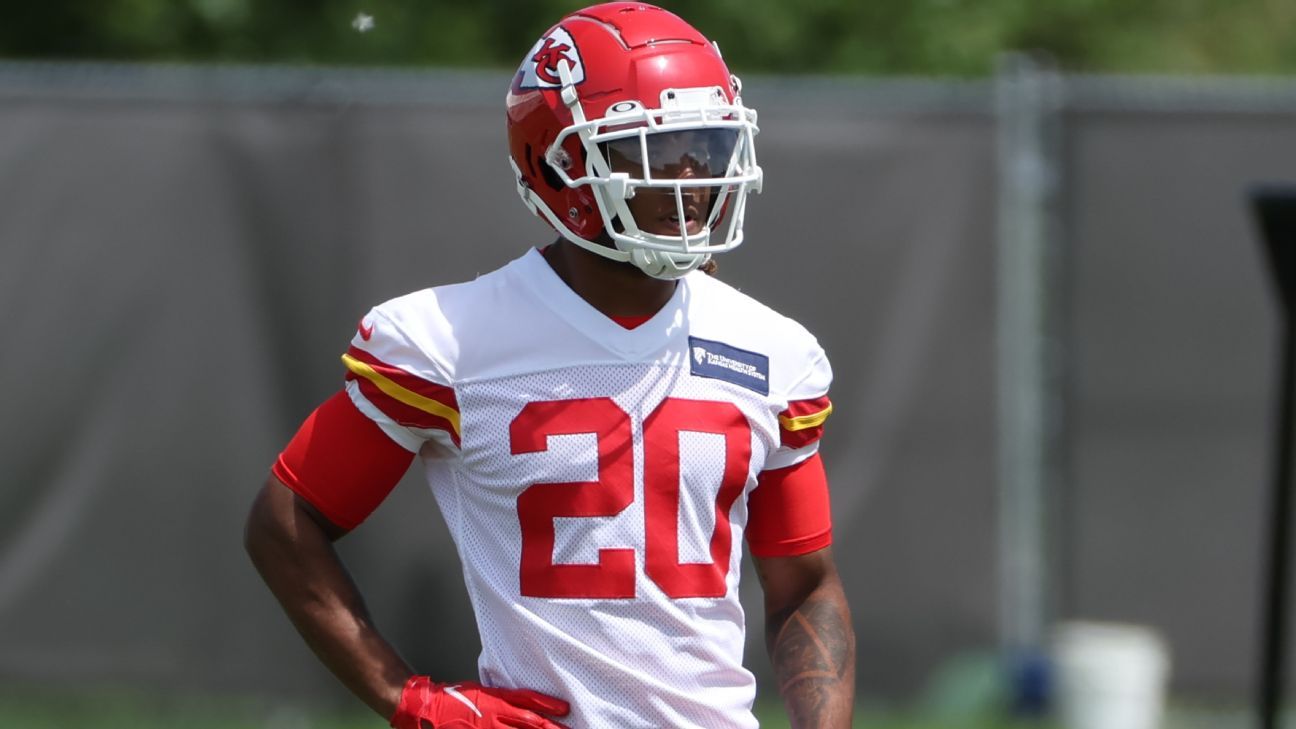 The 2022 NFL training camps continued on Monday with just under four weeks until the regular season begins on Sept. 8.

Kansas City Chiefs safety Justin Reid played the role of kicker in practice today after making a PAT in Saturday’s preseason game, while Green Bay Packers‘ Mason Crosby returned to kicking workouts for the first time since off-season surgery on his right knee.

The New York Giants and San Francisco 49ers are experiencing injury woes, each missing over a dozen players from practice, but there is reason for optimism. On the flip side, the New York Jets‘ injury reinforcement at left tackle arrived to camp today. And the New England Patriots and Carolina Panthers are preparing to face each other in joint practices starting Tuesday — which could help the Panthers decide between quarterbacks Baker Mayfield and Sam Darnold to be their starter.

Here’s the rest of what you need to know from camps across the league.

Top NFL news of the day

Fifteen illegal contact flags thrown in Week 1 of NFL preseason: It’s an elevated number that reflected the league’s request that officials pay close attention to those fouls.The league does not compile public preseason penalty data, but the total is based on an ESPN examination of the week’s play-by-play logs. It represents a steep rise from 2021 trends, when officials threw only 36 flags for illegal contact for the entire 18-week regular season. It was also a significant bump from the average of 97 established annually between 2002 and 2020.

Titans LB Bud Dupree pleads guilty to lesser assault charge, gets probation: Dupree pleaded guilty to a lesser assault charge in Nashville on Monday and was sentenced to six months of probation, according to online court records. Dupree had been cited with misdemeanor assault (fear of bodily injury) after an altercation with an employee at a Walgreens in Nashville in January and turned himself into authorities in February.

San Francisco 49ers safety Jimmie Ward could miss season opener with hamstring injury: Niners coach Kyle Shanahan announced Monday that free safety Jimmie Ward pulled a hamstring Sunday in practice and will be out “some time.” Asked if Ward could miss the Sept. 11 opener against the Chicago Bears, Shanahan said that was a possibility. “There’s a chance,” Shanahan said. “It was a pretty bad hamstring injury. It’s not like the other two guys. We’ll see here over the next couple of weeks how it plays out.”

New England Patriots: Today’s practice was the appetizer to the main menu coming Tuesday, when the Panthers are in town for a joint practice. “I think this will be our first test,” starting left tackle Trent Brown said. The Patriots didn’t run many full-speed competitive drills, but if there was a highlight, it was wide receiver Nelson Agholor making two catches of the one-handed variety. After the first, quarterback Mac Jones moved in Agholor’s direction to celebrate with him. — Mike Reiss

Tennessee Titans: Second-year cornerback Caleb Farley had a good day against the Titans’ offense. Farley showed sticky coverage in man situations during team period against camp standouts Racey McMath and Kyle Philips. He also had two more pass breakups in coverage against McMath during a two-minute period. Farley said he’s starting to feel more natural getting out of his backpedal and closing on the football. “When you’re out there every single day and you work hard, you have a tendency to improve,” Titans coach Mike Vrabel said of Farley. “That’s what happens when you can string some days together and use the techniques that we’re teaching.” — Turron Davenport

Kansas City Chiefs: Safety Justin Reid was the kicker during a special teams period and made 7 of 9 attempts, all from PAT range or in. One of Reid’s kicks hit the upright while another went wide right. Coach Andy Reid said he let Reid handle the kicking duties because Harrison Butker has a sore ankle. Andy Reid said he expected Butker to kick in Saturday’s preseason game against the Commanders. Reid made a PAT in last week’s game against the Bears. — Adam Teicher

New York Giants: The injuries are really taking their toll on the Giants. Two starting wide receivers (Kadarius Toney and Sterling Shepard), two starting offensive linemen (left guard Shane Lemieux and center Jon Feliciano), starting middle linebacker Blake Martinez and their best defensive player in Leonard Williams were among 21 players either limited or out of practice because of injuries. The Giants were so light they could only field two offensive lines — no third team — at Monday’s practice. It’s disconcerting in that this team has been devastated by injuries in recent years. Fortunately, most of the current injuries aren’t long term. “We’re certainly down a little bit,” coach Brian Daboll said before practice. “So again, those aren’t long-lasting deals. But it’s good for some of these other guys to get their chances too now.” That is one way to look at it with the regular season still about four weeks away. — Jordan Raanan

New York Jets: Left tackle Duane Brown, who agreed to terms last Thursday, finally showed up, signed his two-year, $22 million contract and made an appearance on the practice field. He didn’t practice, though. Brown, who turns 37 on Aug. 30, worked off to the side with a member of the conditioning staff. He hasn’t suited up since last Jan. 9 for the Seahawks, so he will need a ramp-up period. The Jets hope to have him on the field soon, definitely by the end of the week. They have only 10 practices left before they begin their Week 1 prep for the Ravens. Without Brown, and with Mekhi Becton (knee) lost for the season, they rotated backup Chuma Edoga, rookie Max Mitchell and former practice-squad player Grant Hermanns at left tackle. They need Brown, ASAP. — Rich Cimini

Green Bay Packers: No, Mason Crosby isn’t worried about being replaced by the robot that simulated kicks in practice on Monday. It was just a coincidence that the veteran went through his first kicking workout since he underwent surgery this summer on his right knee just before the “Seeker” — a high-tech version of a JUGS machine — arrived at Packers camp for a tryout. Previously, Crosby had been seen kicking soccer balls as part of his rehab. “I’ll kick again Wednesday and then my plan is to kick Friday and almost try to do a pre-game type of routine, and then we’ll see where we’re at,” Crosby said after Monday’s practice.

The Packers are already on their second fill-in kicker, Ramiz Ahmed from the USFL, after Gabe Brkic was released following the preseason opener. There’s a chance Crosby will not kick in any of the preseason games, but the plan all along was for him to be ready for Week 1. “It’s getting there,” he said. However, that means he won’t get any game action with his new snapper/holder combination. New punter Pat O’Donnell will be the holder (although backup QB Jordan Love got in some holding work on Monday), and newcomer Jack Coco is currently the only long snapper in camp. — Rob Demovsky

Chicago Bears: Teven Jenkins played 36 snaps in Chicago’s preseason win over Kansas City on Saturday, all of which came at right tackle. The second-year offensive lineman settled in after a committing an early penalty and nearly giving up a sack, the byproduct of rust that built up after Jenkins missed seven straight practices an undisclosed injury. Two days after the preseason opener, the Bears moved Jenkins inside and had him take all his reps at right guard with the second and third team offense at practice on Monday. This was an idea Chicago’s coaches hinted at throughout the spring and could be his best fit and chance of sticking on the Bears’ roster. “Guards get stressed mentally more than tackles do in this system,” offensive coordinator Luke Getsy said. “That’s the strength of his game, so we want to try that and see what that looks like within what we’re trying to get done.” — Courtney Cronin

Carolina Panthers: Wide receiver Terrace Marshall Jr., cornerback Keith Taylor, tight end Stephen Sullivan, lineman Dennis Daley and defensive tackle Derrick Brown returned for a short practice in pads on Monday before the team left for New England, where it will hold joint practices against the Patriots on Tuesday and Wednesday. Coach Matt Rhule plans to continue to rotate quarterbacks Baker Mayfield and Sam Darnold with the starters by period or possibly days in the practices as they battle for the starting job. There will be a lot of focus on two-minute offense and defense. Rhule hopes to name a starter sometime after Friday’s preseason game in Foxborough, Mass. “I think the joint practices are in some ways more important than the game,” Rhule said. “It’s unbelievably valuable for all of our guys.” — David Newton

San Francisco 49ers: After the news that free safety Jimmie Ward is out for “some time” with a hamstring injury and could miss Week 1 against the Bears, Niners coach Kyle Shanahan sounded frustrated by the accumulation of injuries his team has already had in camp. That’s especially true of the soft tissue issues they’ve had, most of which have come in the past couple of weeks.

“It’s kind of been bothersome to me,” Shanahan said. “I think they’ve all come after our days off. I think it’s been a real challenge of this camp, more than any we’ve been in with just how it’s spaced out with these games and our day off rules and to really get in a groove for guys, once you get about two days in, they’re getting a day off, sometimes two days off.” The 49ers had a whopping 13 players not participating in Monday’s practice for a variety of injuries. The good news is that none seems to be long term, but it’s obviously a concern for a team that has struggled to stay healthy in recent seasons and has championship aspirations. — Nick Wagoner

Ravens CB Marcus Peters takes part in drills for the first time since tearing an ACL on Sept. 9.