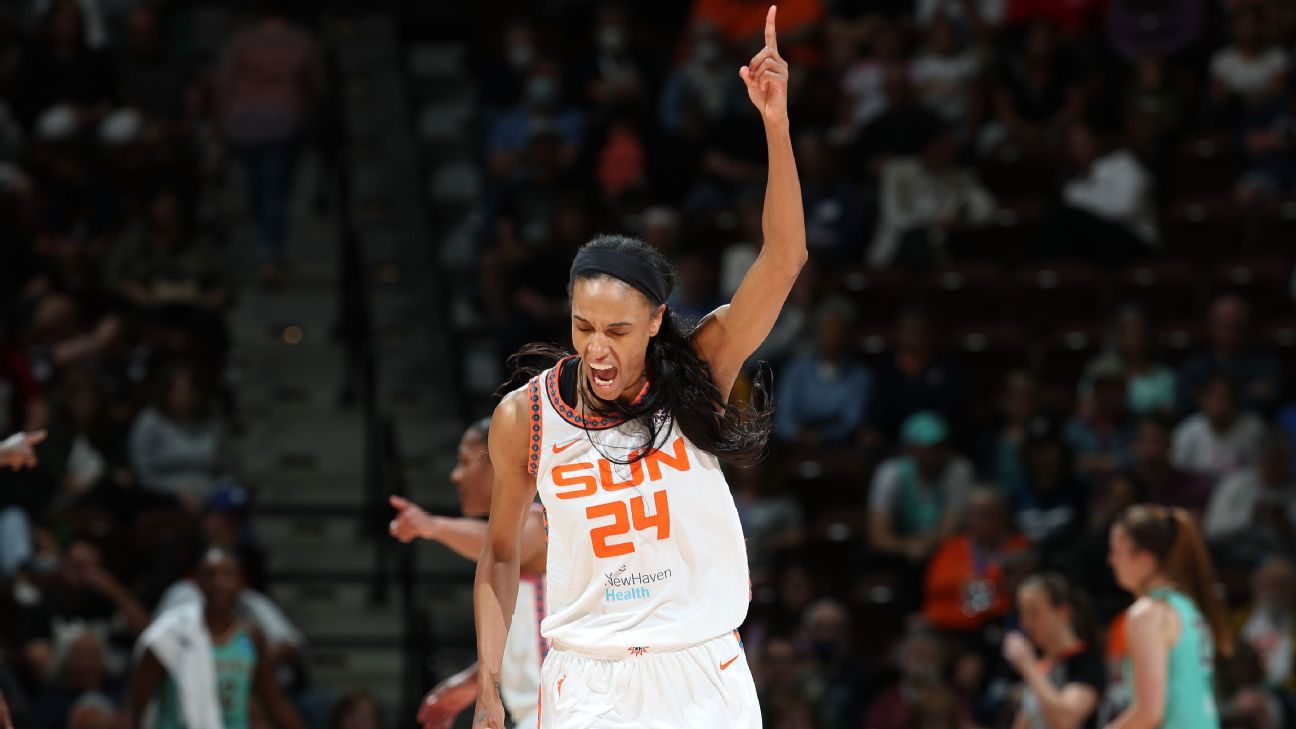 With the 2022 WNBA playoffs set to open Wednesday, it’s time to look at not just the top teams vying for this season’s championship but the top players.

As ESPN ranks the best 25 players in the playoffs — as voted on by ESPN’s Kevin Pelton, Alexa Philippou and M.A. Voepel — we take into consideration not only who is still competing for the title but how well they are playing right now heading into the postseason.

The absence of the Atlanta Dream, Indiana Fever, Los Angeles Sparks and Minnesota Lynx means those players are not considered, which includes two veteran stars who were in our top 10 in July: the Sparks’ Nneka Ogwumike and the Lynx’s Sylvia Fowles. Another former top-10 player, the Phoenix Mercury‘s Skylar Diggins-Smith, stepped away from the team last week and also isn’t featured on this list.

The Aces, the defending champion Chicago Sky, the Connecticut Sun and the Seattle Storm led the way with four players apiece on our list, which features seven new players who weren’t part of our rankings heading into July’s All-Star break.

Aces’ A’ja Wilson rises up to deny Breanna Stewart at the rim and Kelsey Plum sinks a 3-pointer shortly after.

Wilson, who turned 26 earlier this month, could be closing in on her second WNBA MVP award. Her 50.1% shooting from the field and her rebounding average are both career highs. She also has added the 3-pointer to her arsenal, making 31 this season after just one last year and none her first three seasons. She led the Aces to the No. 1 seed. — Voepel

For the third time in her career, Stewart finished atop the league in my wins above replacement player (WARP) metric. The previous two times that happened, 2018 and 2020, the Storm finished with the best record in the league (tied in 2020) and won titles. This year, Seattle finished fourth, allowing Wilson (a close second in WARP) to edge Stewart for the top spot. — Pelton

Candace Parker turns Stephanie Talbot’s head with the pass fake and easily walks into the lane for the layup.

In what she has alluded to as her final year in the WNBA, Parker continues to demonstrate, even at age 36, what makes her one of the greatest to ever play the game. It’s no wonder that with Parker finally healthy this year, and with a championship season in Chicago already under her belt, the Sky have built splendidly upon 2021’s enormous playoff success and are one of the favorites to win it all this year. — Philippou

Even before Plum’s breakthrough season, which saw her win All-Star MVP and finish second in the league in scoring behind Stewart, she was a dangerous playoff contributor. Plum upped her scoring average by 4.8 PPG during the Aces’ semifinal loss last year and averaged 15.2 PPG and 7.8 APG in the 2019 playoffs, when she scored just 8.6 PPG during that regular season. If Plum lifts her performance again, look out. — Pelton

Jones might be less of a focal point for the Sun now that they have both Alyssa Thomas and Brionna Jones to lean on, in addition to high-volume shooters Courtney Williams and DeWanna Bonner. But Jonquel Jones has continued to impress on both ends of the floor, including by putting up shooting percentages similar to her 2021 MVP season. Her plus-9.8 on/off court net rating is still the best on the team. — Philippou

Elena Delle Donne pump fakes and drains the and-1 basket for the Mystics.

Delle Donne’s season has been a triumph of her perseverance and the Mystics’ willingness to come up with a playing schedule for her to avoid aggravating the back issues that cost Delle Donne all of 2020 and most of 2021. Their strategy of recovery time and making sure she was healthy and rested at the end of the season made sense, and she made the most of her 25 games. — Voepel

Vandersloot’s assist average is the lowest it has been since 2016, but that reflects Chicago’s talent depth and the passing skills of all its players, including the posts. The Sky lead the WNBA in assists per game (24.3) and field goal rate (48.1%), with Vandersloot a key factor in both. She was outstanding during the 2021 playoffs, and she is ready for another run. — Voepel

Ionescu’s emergence following her early-career ankle injury has catapulted the Liberty back into the postseason, where they hope to build upon last year’s first-round exit. The University of Oregon product has established herself as one of the most dynamic players in the league, just as so many thought she could be when she was selected No. 1 overall in the 2020 WNBA draft. This summer, Ionescu recorded two triple-doubles, bringing her career total to three (tied for best in the league alongside Parker). — Philippou

Thomas continues to be the Sun’s Swiss Army knife and leader in grit, finishing in the top 25 in the league in scoring as well as top five in both rebounds and assists. After several close calls earlier in her career, she became the fifth player to join the multiple triple-double club (including regular season and postseason) with two in less than 14 days after the All-Star break, while also putting together a compelling bid for an All-Defensive Team and/or Defensive Player of the Year consideration. — Philippou

A sure lock for Sixth Player of the Year, Jones has continued to dazzle following her breakout season in the 2020 bubble, earning her a second consecutive All-Star bid along the way. She continues to be one of the most efficient scorers in the W, a force on the offensive glass and staunch defensively. How Curt Miller manages his frontcourt rotation in the postseason with the Joneses, Thomas and Bonner will be something to watch closely. — Philippou

Young’s breakout season alongside Wilson and Plum as part of the Aces’ big three has catapulted her to WNBA stardom, earning Young a first All-Star bid along the way. A pair of consecutive 20-plus point outings in the closing weeks of the regular season — which featured a 4 for 6 night on 3-pointers against the Dream — helped the Aces enter the playoffs on a four-game winning streak and secure the No. 1 overall seed. — Philippou

Emma Meesseman gets the pass and knocks down the fading jump shot for the Sky.

Surrounded by talented scorers after signing with Chicago as a free agent, Meesseman saw her usage rate drop to 18%, the lowest it has been since her rookie season. On the flip side, Meesseman made a career-best 60% of her shots inside the arc, finishing in the top 10 in true shooting percentage (.617) for the third time. — Pelton

Loyd’s two games against Las Vegas in the season’s final week showed extremes in her game. A week after scoring a season-low one point against the Aces at home, Loyd tallied a career-high 38 in Las Vegas on the regular season’s final day. Loyd drained eight 3-pointers in that contest and finished fourth in the league with a franchise-record 84 treys this season. — Pelton

Gray is coming off a career-high 33 points, along with nine assists and seven rebounds, in the Aces’ regular-season finale win over Seattle. If that is sending a message about how ready for the playoffs Gray is, look out. She has made some highlight-reel passes this season, and if defenses focus too much on her playmaking, she reminds them she can fill up the bucket too. — Voepel

Wings’ Allisha Gray knocks down a 3-pointer from the wing to extend Dallas’ lead.

For the Wings to win their first playoff game since the franchise moved to Dallas, Gray will need to be the All-Star-caliber, two-way threat she has proved herself to be this season, especially with Arike Ogunbowale out with an abdominal injury through the first round. Gray is the best 3-point shooter on the squad (40.8%), and her plus-14.1 on/off net rating remains a team high. — Philippou

Atkins is the Mystics’ second-leading scorer, a top-notch defender and durable. She started all 36 games this season, and she is second on the team in minutes played (30.0 per game). She scored in double figures in all but four games, and she and fellow guard Natasha Cloud help form the backbone of the Mystics’ WNBA-leading defense. — Voepel

Ariel Atkins gathers the rock and buries the 3-pointer from the wing for the Mystics.

Copper, last year’s WNBA Finals MVP, is having her best statistical season yet, with career highs in points, rebounds and assists. In some ways, it might not seem right to have her this low in the rankings, as she is the Sky’s leading scorer. But that really reflects how balanced Chicago is and how well the Sky players work together. — Voepel

Even as she nears retirement, Bird has picked up her game over the course of the season. During Seattle’s final eight games, Bird upped her averages to 9.0 PPG and 6.6 APG, the latter figure surpassed only by Washington’s Natasha Cloud over the course of the season. One interesting question is how much coach Noelle Quinn might be able to extend Bird’s minutes in the playoffs at age 41. — Pelton

Bonner has remained solid for the Sun this season, doing a little bit of everything on the floor depending on what they need, but she is a big help when she’s shooting well from 3. Her 32.9% accuracy from deep is among the best marks of her career. — Philippou

Since moving into the Storm’s starting lineup in late July, Charles has blended well with the team’s other three homegrown U.S. Olympians. She has scored more efficiently and been a more impactful rebounder in Seattle, giving the Storm another option to anchor bench-heavy lineups and making the right play when double-teamed. — Pelton

Healthy after being limited to 13 games in her first season with the Liberty, Howard has provided the versatile presence New York anticipated. One of five players in the WNBA to average at least a steal and a block per game, she shot 55% as the screener on pick-and-rolls according to Synergy Sports tracking — best of the seven players who attempted at least 60 such shots. — Pelton

Since moving into Dallas’ starting lineup for good in mid-July, McCowan has been a force in the paint, helping replace the production lost with Arike Ogunbowale missing time due to injury. McCowan has averaged a double-double (16.2 PPG, 10.0 RPG) and ranks second in the WNBA in both rebounding and free throw attempts (6.2 per game) in that span. — Pelton

Mabrey’s statistics are very similar to last year’s, which is a good thing as she showed in 2021 that she could be a starter. This year, she has started almost every game and been a dependable player for Dallas. The trade that brought Mabrey from Los Angeles for a second-round draft pick in 2020 worked out very well for her and the Wings. — Voepel

In addition to her typical prowess as a perimeter defender, Cloud took home her first WNBA peak performer award as the league’s assist leader in 2022, finishing with 7.0 per game and at least five dimes in all but five of her outings. Her offensive contributions from a scoring standpoint became even more critical with Delle Donne missing time — Cloud’s 10.7 points on 9.1 field goal attempts per game are both career highs, and her 39.9% from the field second-best. — Philippou

Cunningham turns 26 on Tuesday and has grown up as a player the past two seasons with Phoenix. She’s a candidate this year for the league’s most improved player, as her scoring, rebounding and assists averages are all career highs. Cunningham had some big moments in the 2021 playoffs, building on that this season when a beleaguered Mercury team really needed it. — Voepel