15.3 C
Los Angeles
Sign in / Join
Home Science How Do You Get the Monkeypox Shot? Here’s What We Know About... 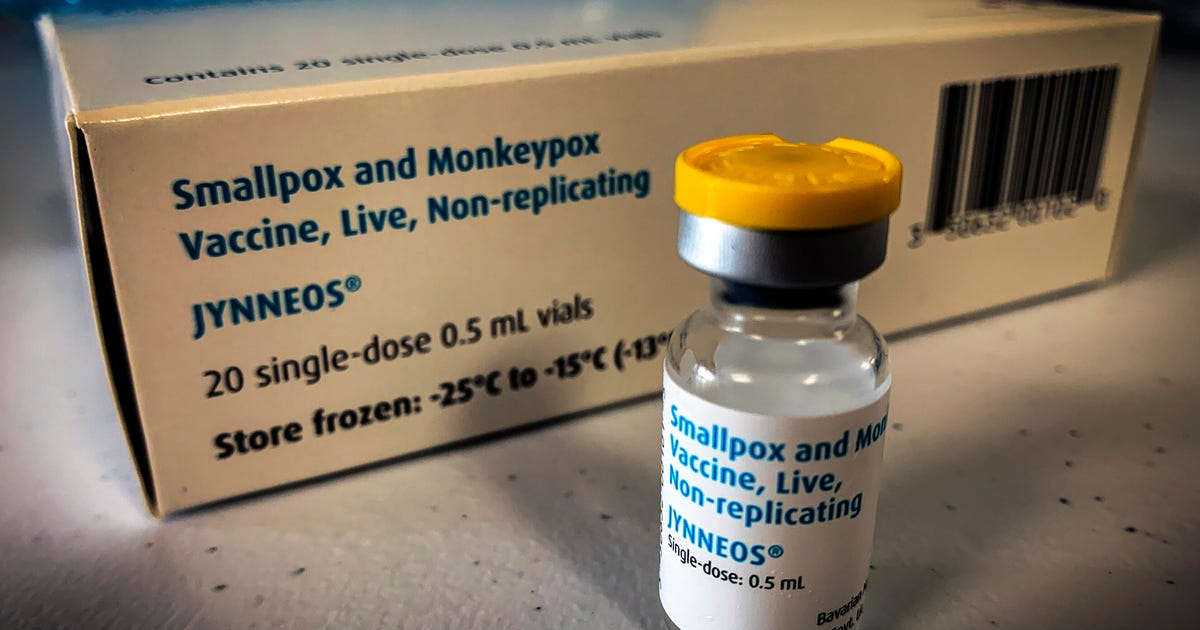 The monkeypox vaccine is available to people at higher risk of getting the disease. Because supply has been so limited, health officials authorized a different method called intradermal vaccination, which requires a lower dose of Jynneos.

Vaccination is an important tool to slow the monkeypox outbreak happening in the US and other countries. Access to vaccines is crucial for people most at risk.

What it means for you

Some men who have sex with men are eligible for the vaccine, as are other people who may’ve been exposed to monkeypox.

Jynneos will be given out a little differently now. If you’re eligible for a monkeypox vaccine, you’ll likely be getting a shot under a top layer of skin, instead of deeper into your arm. That’s because the US Food and Drug Administration authorized intradermal injection for the monkeypox vaccine this month, which may increase the US supply by up to five times since it requires a much smaller dose than one given subcutaneously.

Also called “dose-sparing,” intradermal types of injections aren’t new to health care. But the change in medical guidance on how the monkeypox vaccine can be administered reflects a shortage of Jynneos that’s plagued the vaccine rollout since it began. Health officials have touted a national stockpile of vaccines that work against monkeypox as well as smallpox, but getting them out to states and into the arms of people who need them has been a challenge.

According to a report from The New York Times, a hurdle in the monkeypox vaccine rollout (besides limited supply of Jynneos) is that the federal system being used to move vaccines to states and cities is different from the system local health officials are used to, which is run by the US Centers for Disease Control and Prevention and is already linked to state databases. The current system states are using is made for mass vaccine rollouts where every person would need a vaccine (like a smallpox bioterrorism event), and it’s been difficult in some states for local health officials to track their orders or get to the site where the doses have been delivered, the Times reports.

But federal health officials are confident in the new intradermal vaccination method, which they say gives a similar immune response as the traditional method. But it still requires two doses, about 28 days apart, which runs against one-dose priority policies put in cities like San Francisco and New York City, which make up a large portion of the country’s monkeypox cases.

Read more: Monkeypox Explained: Symptoms, Treatment and How It Spreads

Monkeypox Explained: What You Need to Know

What is intradermal vaccination?

Intradermal vaccination is a method that injects the vaccine under a more shallow layer of skin, typically on the inner side of the forearm. This should produce a “noticeable pale elevation of the skin,” according to the US Centers for Disease Control and Prevention. Counties including Los Angeles county and Fulton county in Georgia (where Atlanta is) have already transitioned to intradermal injections, according to the White House.

Most vaccines we get these days go either into the muscle in our arm (intramuscular injection) or into the fatty tissue under our skin (subcutaneous injection), like Jynneos has been given so far. Subcutaneous injection of Jynneos is the only authorized method of vaccination for people younger than 18. If you get the monkeypox vaccine intradermally, you’ll still need two doses.

When the FDA authorized the new vaccine method, the agency referenced a study published in 2015 that found that a smallpox vaccine given intradermally gave a similar immune response in people compared to the vaccine given subcutaneously.

Why is there a monkeypox vaccine supply problem?

The US has a supply of vaccines that work against monkeypox not because it anticipated a monkeypox outbreak, but in case of another smallpox outbreak, which typically causes much more severe disease. (More on this below.) However, the supply of Jynneos, the newer vaccine specifically approved to prevent monkeypox, has been in particularly short supply.

Officials who spoke to The New York Times said the supply issue is partly because the government waited too long to ask Bavarian Nordic, which makes Jynneos, to bottle and fill the vaccine order the US had already purchased.

Another report by the Times alleges that the US national stockpile of monkeypox and smallpox vaccines dwindled because the government never replaced the expired doses and instead put money into technology that would extend their shelf life. Part of the reason for this was that the government created the stockpile not for monkeypox but for smallpox, which is a more contagious and often more serious disease officials fear could be used in biological warfare against the US.

The US Department of Health and Human Services didn’t respond to a request for comment on the reports.

Who’s eligible for the vaccine and how do I get one?

Exact criteria for who should get a monkeypox vaccine depend on the city or state people live in and how widespread the outbreak is there, but men who have sex with men and who have had multiple or anonymous sexual partners in the last two weeks are eligible in cities like New York. That’s because gay and bisexual men are currently at higher risk in the outbreak, though anyone with close contact to monkeypox can get the disease. You also may be eligible if you were recently exposed to someone with monkeypox, or if you’re a health care worker who works directly with the virus that causes monkeypox.

According to the CDC, you meet the criteria for a monkeypox vaccine if:

If you think you qualify for a vaccine or were exposed to monkeypox, contact your local health department or doctor’s office to find an appointment in your area. You can also book an appointment for the vaccine online, a process that’ll walk you through the eligibility criteria. Here is New York City’s vaccine appointment website. You can make an appointment and find a vaccine in San Francisco by calling one of the city’s clinics or visiting its drop-in location.

What are the monkeypox vaccines? Who has immunity from the smallpox vaccine?

The US has two vaccines in its national stockpile that work against monkeypox. Jynneos is currently being given out to people before an exposure, as well as after an exposure, as it’s a newer vaccine that’s safe for most people.

Jynneos (made by Bavarian Nordic) is a new-generation vaccine approved by the US Food and Drug Administration in 2019 for monkeypox and smallpox. It’s a two-dose vaccine, with each shot given four weeks apart. It uses a weakened virus and is approved for adults 18 and older who are at high risk of getting monkeypox or smallpox.

Jynneos is the vaccine that is being shipped out and currently being used in the US monkeypox response. Because of limited supply, it’s likely you’ll only be able to book an appointment for the first dose for the time being. In New York City, for example, health officials say you’ll be contacted if you received a first dose about the second dose in the coming weeks.

ACAM2000 is a second-generation smallpox vaccine that also works against monkeypox. According to the CDC, ACAM2000 is a derivative of Dryvax, which helped eradicate smallpox. (The two diseases are closely related and both caused by orthopoxviruses, which makes this possible.) If necessary, the US Department of Health and Human Services said it’s also prepared to ship out the ACAM2000 vaccine, which is in greater supply than Jynneos but remains a second choice in the monkeypox response because it has a side effect profile that isn’t safe for certain people.

ACAM2000 is administered differently than the typical vaccine shot we’re used to, including intradermal injection. It’s given by dipping a needle into a vaccine solution which will then be “pricked” several times on the upper arm. It will cause a localized infection (a “pox”), prompting an immune response.

While ACAM2000 doesn’t cause smallpox, it contains live vaccina virus, which isn’t suitable for everyone. It could be unsafe for immunocompromised people, pregnant folks and those with certain heart or skin diseases, like eczema.

Smallpox was declared eliminated from the world in 1980. The US stopped routine vaccination against it in 1972, though some health care workers or people who work in labs may have had the vaccine. Historically, according to the CDC, smallpox vaccines were 95% effective against infection and protect you for about three to five years, and after that protection starts to wane.

Because of this, it’s possible people born before the early 1970s who got the smallpox vaccine might have some cross-protective immunity against monkeypox, according to the WHO, but there is “little immunity” to younger people living in non-endemic countries because they’ve had no exposure to a similar virus.

How effective are the vaccines against monkeypox? How long do they take to work?

Giving Jynneos within four days of a monkeypox exposure is the best option for stopping the onset of the disease, according to the CDC. If it’s given four to 14 days after an exposure, the CDC says, Jynneos may not prevent monkeypox but will likely reduce the severity of symptoms. However, this information was published when Jynneos was given only the “standard” way (subcutaneous injection).

The CDC says that the Jynneos vaccine takes two weeks (14 days) after the second dose for immunity to build, and that ACAM2000 takes four weeks for maximum immunity. Though many people are receiving only the first dose of Jynneos at this time, early research suggests that one dose will still offer some protection, at least for a shorter period of time.

Because the US outbreak of monkeypox is so new, there’s no data yet on exactly how effective the vaccines will be in the current situation, according to the CDC.

You should still self-isolate if you develop symptoms of monkeypox after getting vaccinated, such as a rash.

Why does the US have a stockpile of monkeypox vaccines?

The US has a stockpile of Jynneos and ACAM2000 on hand not because the country was worried about an outbreak of monkeypox (which has been endemic in some African countries for years), but in case smallpox becomes a public threat again. Smallpox was declared eliminated in the 1980s, and the last natural outbreak in the US happened in 1949. But smallpox is usually much more severe than monkeypox, and officials worry it could be used as biological warfare.

“The stockpile was created in the event of a biological weapons attack on the United States with smallpox,” Dr. Amesh Adalja, an infectious-disease expert and senior scholar at the Johns Hopkins Center for Health Security said. In this event, health officials would not be rationing vaccines or using only the newer-generation vaccine, according to Adalja.

“If there was a smallpox attack, we would be using whatever vaccines we have to be able to deal with it,” he added.

The information contained in this article is for educational and informational purposes only and is not intended as health or medical advice. Always consult a physician or other qualified health provider regarding any questions you may have about a medical condition or health objectives.