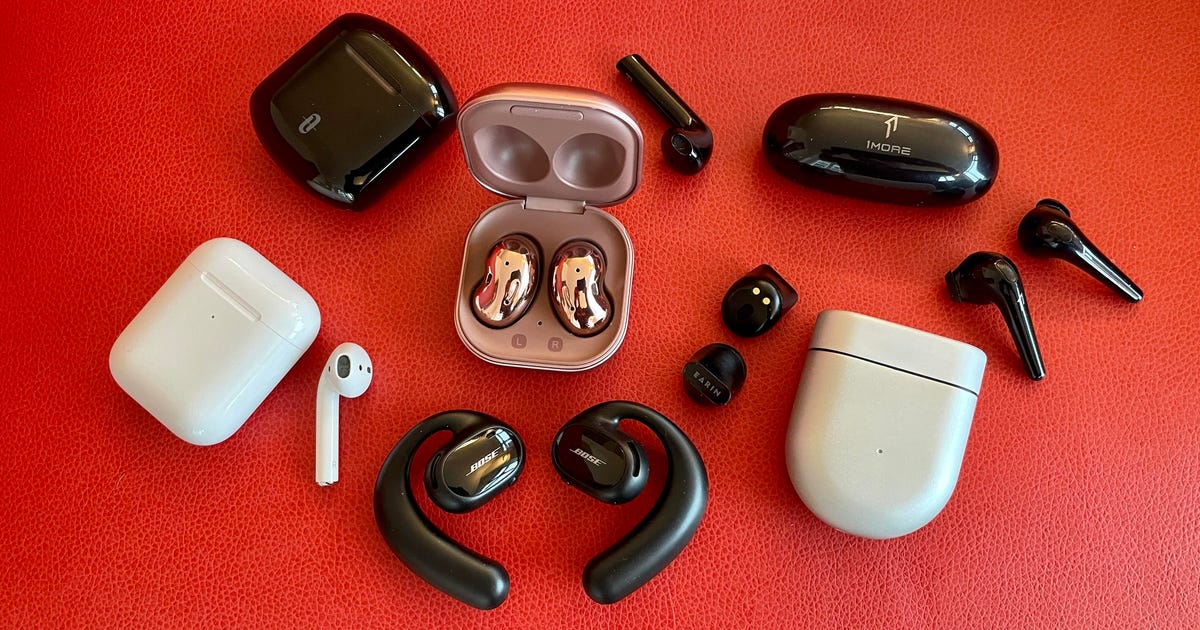 Not everybody likes earbuds with silicone tips. They can be too tight-fitting for some — not to mention all the dreaded earwax. Enter “open” earbuds. These are like the standard third-gen Apple AirPods a great alternative. Their simple design and comfortable fit make them perfect for people who run while listening to music or podcasts as they don’t drown out all of the sound around them. You should stay careful out there, but open earbuds can make running much safer than doing so with silicone-tipped earbuds.

Whether you’re a runner or biker who wants to hear the outside world or you’re just someone who doesn’t like having an ear tip jammed into your ear canal, an open-style bud is an ideal choice. Apple’s AirPods are certainly an option but there are plenty of good alternatives, some of them cheaper. Here’s a look at the top open-style buds. I’ll update this list as I test more worthy candidates.

The LinkBuds are, in a sense, Sony’s answer to Apple’s standard AirPods. While they don’t sound as good as Sony’s flagship WF-1000XM4 noise-isolating earbuds, they offer a discreet, innovative design and a more secure fit than the AirPods, as well as good sound and very good voice-calling performance.

Like the third-gen AirPods, their open design allows you to hear the outside world — that’s what the ring is all about. That makes them a good choice for folks who want to hear what’s going around them for safety reasons or just don’t like having ear tips jammed in their ears. They also have a few distinguishing extra features, including Speak to Chat and Wide Area Tap. Instead of tapping on a bud, you can tap on your face, just in front of your ear, to control playback.

They’re IPX4 splash-proof and thanks to their fins — Sony calls them Arc Supporters — they lock in your ears securely and work well for running and other sporting activities.

Take one look at the new design of the third-gen AirPods ($179), and the first thing you’ll probably think is: “Those look like the AirPods Pro without ear tips.” You wouldn’t be wrong. While they’re more fraternal than identical twins, the AirPods 3rd Generation are shaped like the AirPods Pro, with the same shorter stems and same pinch controls as those of the Pro. Aside from the design change, which should fit most ears better than the AirPods 2nd Generation (though not very small ears), the biggest change is to the sound quality: It’s much improved. Also, battery life is better, and the AirPods 3 are officially water-resistant and support Apple’s spatial audio virtual surround feature (for Apple users only).

Say what you will about the Samsung Galaxy Buds Live’s bean-shaped design, but it’s certainly innovative. Like the standard AirPods, they have an open design, so you don’t jam an ear tip into your ear. They’re comfortable to wear and fit my ears more securely than the AirPods. These wireless buds are discreet and basically sit flush with your ear, which reduces wind-noise while biking. I regularly use them for running and biking, and they’re great for sporting activities if they fit your ears well. But one warning: Some people won’t get a secure fit, so buy them from a retailer that has a good return policy.

They deliver good sound and work well as a headset for making calls, with good background noise reduction so callers can hear you clearly even when you’re in noisier environments. While they feature active noise canceling, it’s mild compared to the noise canceling in earbuds that have a noise-isolating design. In other words, buy them for their design and sound, not their noise-canceling features.

I never tried the original Fiil CC earbuds, but the next-generation CC2 improves on the performance of the originals, with better battery life (they’re rated at five hours on a single charge) and no audio latency issues when watching videos.

These did stay in my ears better than the standard AirPods. They pair quickly — they’re equipped with Bluetooth 5.2 — there’s a Fiil companion app for tweaking settings and they sound quite decent for open-style buds, with just enough bass to keep you from feeling they’re bass shy. They’re also decent for making calls and have touch controls.

One of their distinguishing features is their open case, which makes it easy to access the buds and put them back in their case. Thanks to some integrated magnets, they stay in the case securely — you can turn it upside down and the buds won’t come out. Unlike the AirPods, these have square not rounded stems, which seems a little weird at first, and they do fit in your ears slightly differently to AirPods as a result.

SoundPeats says its Air 3 buds are 10% smaller than their predecessors, the TrueAir 2, and the case is truly tiny, smaller than the AirPods’ case. The buds stayed in my ears more securely than the AirPods do (I have trouble keeping the AirPods in my ears, especially if I start running). These use Qualcomm’s 3040 chipset, which has Bluetooth 5.2, and I had no trouble pairing them with an iPhone 12 Pro and a Google Pixel 4 XL. My connection was quite stable. The earbuds support the aptX audio codec with compatible devices.

Sound quality is good for open earbuds. It’s right there with the AirPods and these even have slightly more bass. I think most people will be satisfied with the sound. The only issue I noticed is that you can only push them so far. When playing certain tracks at higher volumes I did encounter some distortion; rock tracks where several instruments are playing at once can be challenging. As a result I kept the earbuds at about 60% of maximum. You can adjust the volume using the touch controls, which work well. They do play loud at higher volumes.

The new AirPods 3rd Generation are a nice upgrade over the AirPods 2nd Generation. That said, the AirPods 2, which came out in 2019, are now selling for around $100 and sometimes a little less. While they don’t sound as good as the AirPods 3 and have a longer stem, they fit some people’s ears better (those with smaller ears may prefer these older AirPods due to their slightly smaller design).

As far as headphones go, Bose’s Sport Open Earbuds are funky. Not to be confused with the company’s more traditional in-ear Sport Earbuds and QuietComfort Earbuds, they feature an open design without a tip, meaning the earpiece sits on top of your ear and doesn’t penetrate your ear canal.

Geared toward runners and bikers who want their ears open to the world for safety reasons — or to people who don’t like to have any sort of bud in their ears — they sound surprisingly good. I ended up liking them, but their design isn’t for everybody, and how comfortable you find them will determine how much you like them. Read our Bose Sport Open Earbuds review.

1More has a slightly different take on the standard AirPods for those who have trouble keeping them in their ears. The $54 ComfoBuds (which sometimes dip below $50 with an instant coupon) have mini ear tips on them that help secure them in your ear. They don’t sound fantastic (the bass is slightly lacking) but as their name implies, they’re lightweight, comfortable to wear and work well for making calls.

It’s also worth noting that their charging case is remarkably narrow and compact. It looks like a tiny hot-dog bun. They’re also available in white.

Way back in 2015, Swedish company Earin was the first to release a set of true wireless earbuds. Now it’s released its third-gen A-3 earbuds, and they look a lot like what the standard AirPods would look like if you removed their trademark extruding stems.

They fit my ears securely and they sound decent — arguably better than the AirPods — for this type of earbud, though they’re slightly bass-restrained. I also found they work well for making calls even though they don’t have stems (their noise-reduction is decent though not fantastic), and I liked their charging case.

The A-3 buds have an IPX52 water-resistance rating (they can withstand a sustained spray of water but aren’t fully waterproof) and deliver five hours of battery life with five extra charges from their charging case. They have 14mm drivers, Bluetooth 5.0 and Qualcomm’s higher-end QCC5121 chipset. AAC and aptX audio codecs are supported. (Certain Android devices like Samsung Galaxy smartphones support aptX streaming, but iPhones do not.)