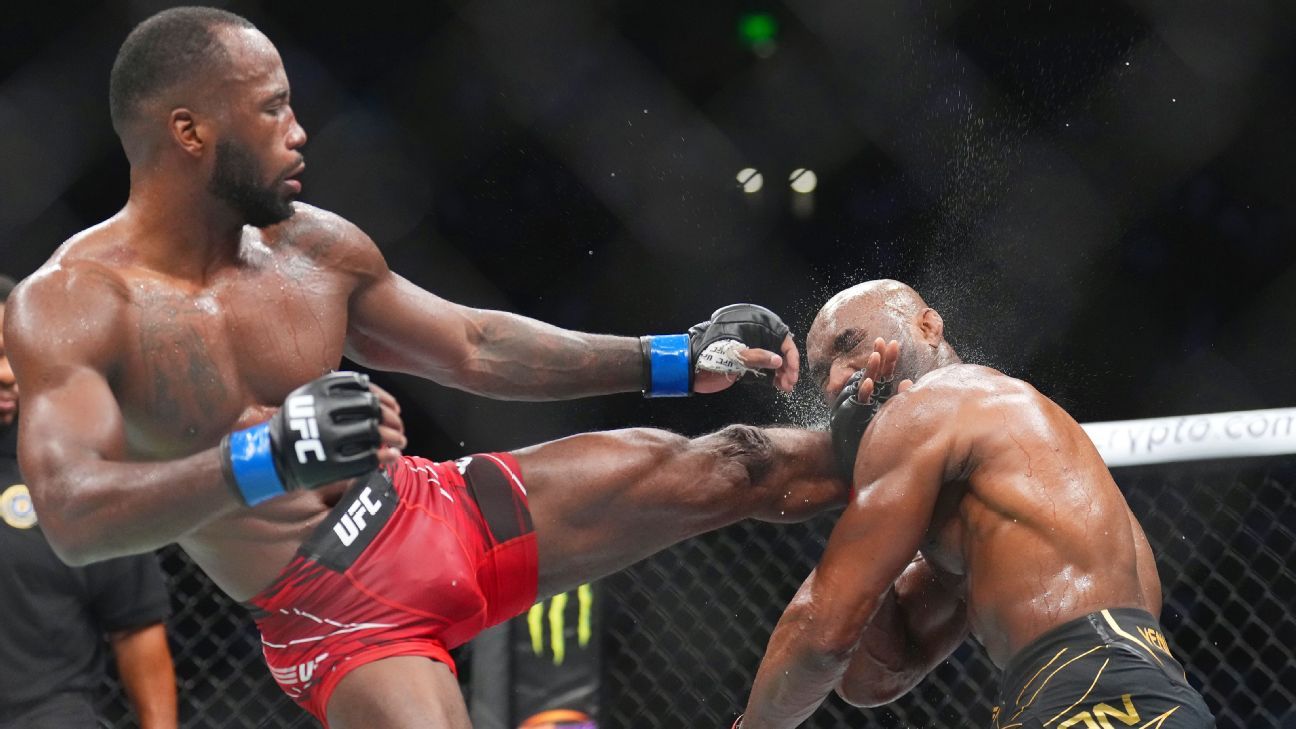 As the fifth round progressed in Salt Lake City, the headlines were already being written. With one minute left in the main event, Kamaru Usman had coasted in his title defense against Leon Edwards.

Then came the head kick that shocked the world.

Edwards became the new UFC welterweight champion with the knockout and sent all those watching into a frenzy. Now Edwards and Usman each have a win over the other, but will a rematch come next?

In the co-main event, Paulo Costa defeated an exhausted Luke Rockhold, and before that, Merab Dvalishvili denied all attempts from Jose Aldo to get back on track.

So what comes next? Let’s take a look at what fights could be booked next.

Who should be next: Kamaru Usman

Edwards himself told ESPN prior to the fight that he viewed this as a “beat him twice” scenario. Sometimes that’s just the case. If you want to dethrone a dominant champ, you have to do it twice. We’ve seen that play out numerous times over the history of the sport, and this is one of those cases. 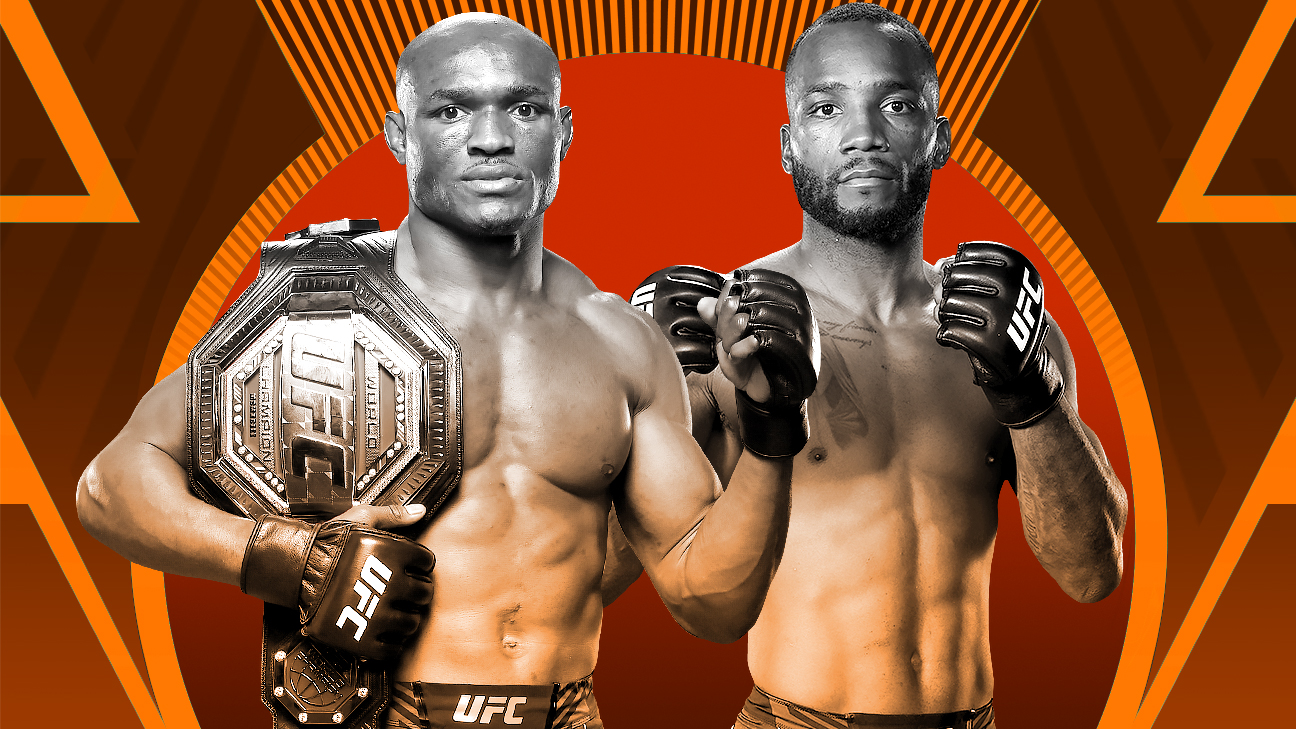 If the PPV is purchased, all fights from UFC 278: Usman vs. Edwards 2 will be available to watch on ESPN+.

Edwards went into UFC 278 believing it was the perfect set of circumstances for him to become a champion. And now that it has happened, he wants to be an active champ. I could see this one getting booked sooner rather than later, since it’s one of those cases where everyone should be on the same page in terms of what’s next, but that also will depend on the upcoming schedule.

Look, we’ve seen what a major force Chimaev has already turned into. He is getting opportunities other fighters don’t, and I could certainly see a scenario in which he ends up getting the next title shot.

Whether it is timing issues with setting up a trilogy between Edwards and Usman or Chimaev simply doing something so incredible in his UFC 279 main event against Nate Diaz next month, it’s possible. But I’m still saying the Usman trilogy is most likely.

Who should be next: Leon Edwards

Ultimately, Usman falls one short of tying Anderson Silva‘s record of 16 consecutive wins to start a UFC career. We’re literally talking about one of the greatest runs the UFC has ever seen, so this scenario warrants an immediate rematch.

As you might know about me, I’m not usually an “immediate rematch” kind of guy. I think immediate rematches should be reserved for the most obvious cases; otherwise, I like the idea of letting things simmer and grow. But this is one of those obvious cases. The matchup between these two is now tied 1-1. Usman deserves to be in a title fight again, immediately. This is a no-brainer.

If the UFC decides to go another direction with its welterweight title, there actually aren’t many fights for Usman that make sense because he already has beaten so many of these guys (twice).

He has never fought Muhammad or Brady. The winner of that fight in Abu Dhabi, United Arab Emirates, will be in line for a big welterweight matchup. I don’t think the winner of that fight will get a title shot quite yet, though. So, this scenario would make sense, but I’ve got to admit, the idea of Usman fighting one of these two just doesn’t feel likely to me.

No disrespect to either of them, but after everything Usman has accomplished, I just don’t see this scenario piquing his interest.

Paulo Costa handily wins his fight vs. Luke Rockhold via unanimous decision in the co-main event of UFC 278.

Who should be next: Jared Cannonier

Costa has expressed some doubts about his future with the UFC, saying he is unhappy with his contact and is interested in pursuing professional boxing. Personally, I hope he continues his MMA career for years to come. He went through a rough patch over the past couple of years, but his talent is undeniable.

As of right now, his next move even within the UFC isn’t obvious. It’s far too soon to talk about a rematch with Israel Adesanya. Jared Cannonier is coming off a loss, so this matchup doesn’t make total sense. But I don’t see another one in the top of the rankings that makes more sense than this one.

If Pereira were to upset Adesanya in their title fight in November, Costa might be looking at a title shot. Of course, Adesanya getting an immediate rematch in the event of a loss would be likely but not guaranteed.

Saturday was a good night for Costa. He is still popular, and he’s still ranked high enough to warrant a title shot against Pereira, if that scenario were to play out.

Who should be next: Winner of Cory Sandhagen vs. Song Yadong on Sept. 17

Dvalishvili is in a weird spot but not a bad spot. His home is bantamweight, but his good friend and training partner is the champ (Aljamain Sterling), and they’re never going to fight; Dvalishvili said as much after Saturday’s victory. There might come a time when Dvalishvili has to move around in weight, but we’re not there yet. He has a lot of momentum at 135 pounds, and this is clearly his right weight class.

He needs to keep doing what he has been doing, which is win, and cross that Sterling bridge when he gets there. The winner of Sandhagen-Yadong makes total sense.

He has said he is open to it. Ultimately, we might see it at some point. And in Dvalishvili’s mind, maybe he’ll decide he’d rather just go ahead and make that move now, acclimate himself to the weight class and start working at a weight he wants to win a title in. But in my opinion, I don’t think you make that move until you’re actually forced to.

Who should be next: Dominick Cruz in Brazil

If Cruz, who lost to Marlon Vera last weekend, can and wants to do it, this is the fight. Arguably the greatest featherweight of all time vs. the greatest bantamweight of all time. Another legend, Frankie Edgar, would like to fight Cruz in his last fight in November, but I think I prefer this one.

One more for Aldo in Brazil, against another legend.

Aldo said he wanted one more crack at a championship and then win or lose, he’d retire. He told me prior to Saturday that if he were to lose, he’d need to sit down with his team and decide what the next step would be. We’ll see what happens.

If he decides the ultimate goal was to retire as a champion and, now that that’s gone, there’s no reason to continue, no one could fault him for it.

Who should be next: Winner of Johnny Walker vs. Ion Cutelaba on Sept. 10

Five years ago, there was a lot of intrigue and expectation around Pedro. Unfortunately, he came up short in some key spots — and then injury sidelined him for three years. He’s only fought twice since returning from injury, but the hype has quickly built back up following back-to-back finishes.

Walker is a little similar. All the athletic talent in the world, but he’s stumbled a lot in recent years, compiling a 1-4 record in his last five. Cutelaba hasn’t suffered through any long skid, but he’s also struggled to really string together enough wins to put himself on the map.

Either way, both have entertaining styles and both are major steps up from what Pedro just fought in Hunsucker.

These are two more light heavyweights who have shown a ton of potential, but are not without their faults and losses. Reyes has nearly reached the top (some felt he actually beat Jon Jones in a title fight in 2020). He’s suffered very tough knockout losses to Jan Blachowicz and Jiri Prochazka since.

Spann has also shown flashes, but is still looking to put together a defining run that would lead him to a title. The biggest problem with this one is that it’s so far away. Pedro had an easy night on Saturday, and I’d like to see him in there sooner rather than later.