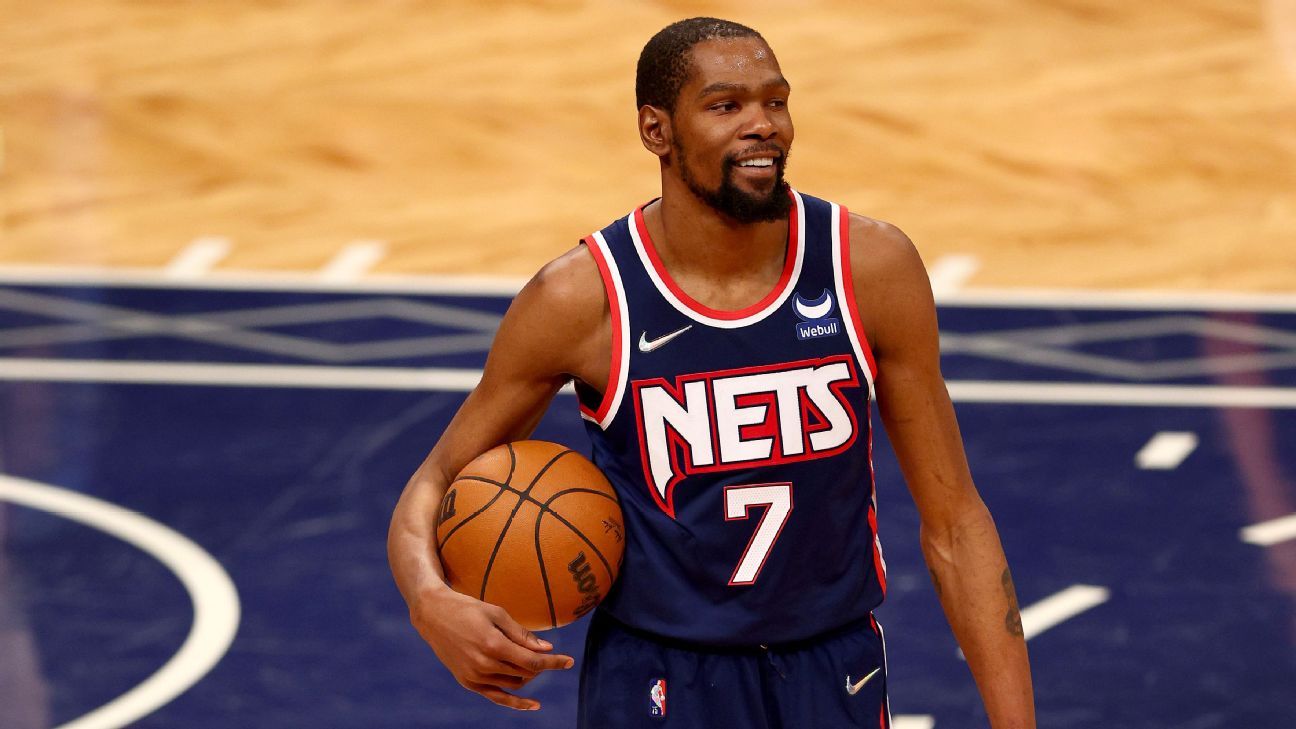 Kevin Durant and the Brooklyn Nets are running it back.

In a statement released Tuesday, Nets general manager Sean Marks said the past MVP and two-time NBA champion will remain with the franchise after originally requesting a trade on June 30. (Durant’s four-year, $198 million extension kicks in this season.)

“[Coach] Steve Nash and I, together with [governors] Joe Tsai and Clara Wu Tsai, met with Kevin Durant and Rich Kleiman in Los Angeles yesterday,” Marks said. “We have agreed to move forward with our partnership. We are focusing on basketball, with one collective goal in mind: build a lasting franchise to bring a championship to Brooklyn.”

Where does the news leave Durant, Kyrie Irving, Brooklyn and the Eastern Conference? Are the Nets the new favorites over East juggernauts such as the Boston Celtics and Milwaukee Bucks?

And what lies ahead for KD, Kyrie and Brooklyn beyond the 2022-23 season?

Our NBA Insiders are breaking down every angle of yet another twist in the Durant-Nets summer saga.

1. What’s your biggest takeaway from KD deciding to stay in Brooklyn?

Tim Bontemps: This is a recognition of the reality of the situation. Durant is under contract for four more years. No one is coming close to giving Brooklyn what it wants. The two choices Durant had were to either play or try to hold out. This is the only logical option for both sides.

Jamal Collier: Well, that was a fun waste of time. Even though this outcome has felt inevitable for a while, I’m still skeptical about the longevity of this partnership. Everyone may be on the same page for now, but I don’t think we’re heading toward a redemption story like Kobe Bryant and the Lakers in 2007.

Nick Friedell: The drama never stops with the Nets — they put Durant’s Boardroom logo on the news release! The big question I have after seeing the statement is: How long will this last? That was a miserable team to be around at times last season, and now they’ll be able to rebuild their culture as training camp nears? That would be a stretch.

Andrew Lopez: The market didn’t shape up the way anyone wanted. Initially, it seemed Brooklyn could get a haul for one of the NBA’s all-time greats. Instead, teams weren’t even willing to put their second-best assets on the table to land KD.

Bobby Marks: This is not surprising. The Nets were waiting for a perfect trade package that never came. The lingering question was whether Durant was going to hold out during training camp and become a distraction. That was put to bed when both sides wisely ended any trade speculation.

Collier: Durant. We so rarely see anyone walking back a public trade request like that. For these past few years, during which one of the game’s great players has been at the top of his game, it would be nice to see him compete for championships instead of being mired in dysfunction. This “outcome” feels like it’s only setting up more drama.

Bontemps: Durant. I’m sure he didn’t anticipate the Nets not getting the kind of offers necessary to get a deal done. But they didn’t, his image has taken a hit and he didn’t get what he wanted. The Nets, by contrast, are big winners for merely still having him on the team.

Marks: The Eastern Conference champions. The Celtics were having a relatively uneventful offseason when they were linked to Durant at the end of July. Now, Boston has some damage control to do with Jaylen Brown.

Lopez: Jaylen Brown, Mikal Bridges and Pascal Siakam, among others. A number of players heard their names dangled in trade talks and now everyone has to act like everything was fine from the beginning. Of course, teams will act as if those players were never actually available, but having to hear your name floated around for weeks could take a toll.

Friedell: The NBA offseason. The Nets gave a huge jolt to a normally quiet time in the sports calendar. The soap opera that usually surrounds this team carried two months’ worth of programming around the league. The media will miss all the rumors and rumblings — all of which ultimately led to no movement at all.

3. Where do the Nets rank in the East heading into this season?

Lopez: Even with a part-time Kyrie Irving, Durant playing 55 games, James Harden getting dealt from Brooklyn and Ben Simmons not suiting up at all, the Nets still won 44 games last season and reached the first round of the playoffs. A healthy mix of Irving, Durant and Simmons should be worth a few more wins, certainly enough to challenge for home-court advantage in the playoffs.

Friedell: Assuming health for their key players — and most importantly, a drama-free run in the regular season, I think the Nets sit in third right now. I don’t believe they are better than the Bucks and Celtics — and I have serious questions as to how long this will last before the next internal blowup — but with Durant, Irving and Simmons, they have a core in place that has the ability to get better together over time.

Bontemps: Either third or fourth, behind Milwaukee and Boston and on par with Philadelphia. Could the Nets win the East? It’s not impossible. But there are too many questions to put them above the two rock-solid contenders at the top of the conference.

Collier: I’m still putting Brooklyn a tier below the four conference semifinalists — Boston, Milwaukee, Miami and Philly — because I don’t believe the Nets will have a normal year with KD, Kyrie and Ben Simmons on the floor. If they do, they’re contenders.

Marks: On paper, the Nets should be in the top three in the East. However, paper does not mean anything when it comes to regular-season games, and Brooklyn should be on the outside of the top four. The Nets are too much of a wild card with Durant, Ben Simmons and soon-to-be free agent Kyrie Irving to trust them as conference favorites.

4. Fact or fiction: KD will spend all four years of his remaining contract as a Net

Lopez: Fact. It feels like the Kobe Bryant situation in Los Angeles in 2007. The trade request is eventually rescinded, and everyone tries to move on. If change does come to Brooklyn, it seems like it comes elsewhere on the roster (or the coaching staff) before Durant does get moved.

Marks: Fiction. What happens if adversity strikes this season and Brooklyn struggles? Do we even know if Durant will be in a Nets uniform come next offseason?

Friedell: Fiction. How could anyone believe after what has occurred that KD will be there for four more years? The bigger question in the short term is whether he will be there the whole 2022-23 season, or will something else occur that will change his mind again?

Collier: Fiction. I wouldn’t even take that bet confidently if you’ve said for four months.

5. Fact or fiction: Kyrie Irving will be with the Nets after the 2023 trade deadline.

Marks: Fact. Unless things truly implode, Irving will be with Brooklyn in mid-February. The big question is whether the Nets reward Irving with a four-year, $209 million extension before the season ends.

Bontemps: Fact. With Durant on the roster, Irving isn’t going anywhere this season. There was plenty of noise about Irving’s status back in June — remember when the “will he or won’t he” was just about Kyrie? — but now he and Durant, in theory, are locked in for this season.

Collier: Fiction. Once one goes, I believe the other will follow. I’m not in the business of ever predicting where Kyrie will be at any given time.

Lopez: Fiction: Because of Brooklyn’s lack of draft picks, it could wheel and deal with players to try to improve the roster. If Irving has his eyes set on leaving Brooklyn, doesn’t it make some sense to get something for him to improve the current situation?

Friedell: Who knows? Trying to chart Irving’s professional course at this point is a fool’s errand. If I had to bet today, I would guess “fact” only because of the Durant news, but everything can change in an instant.