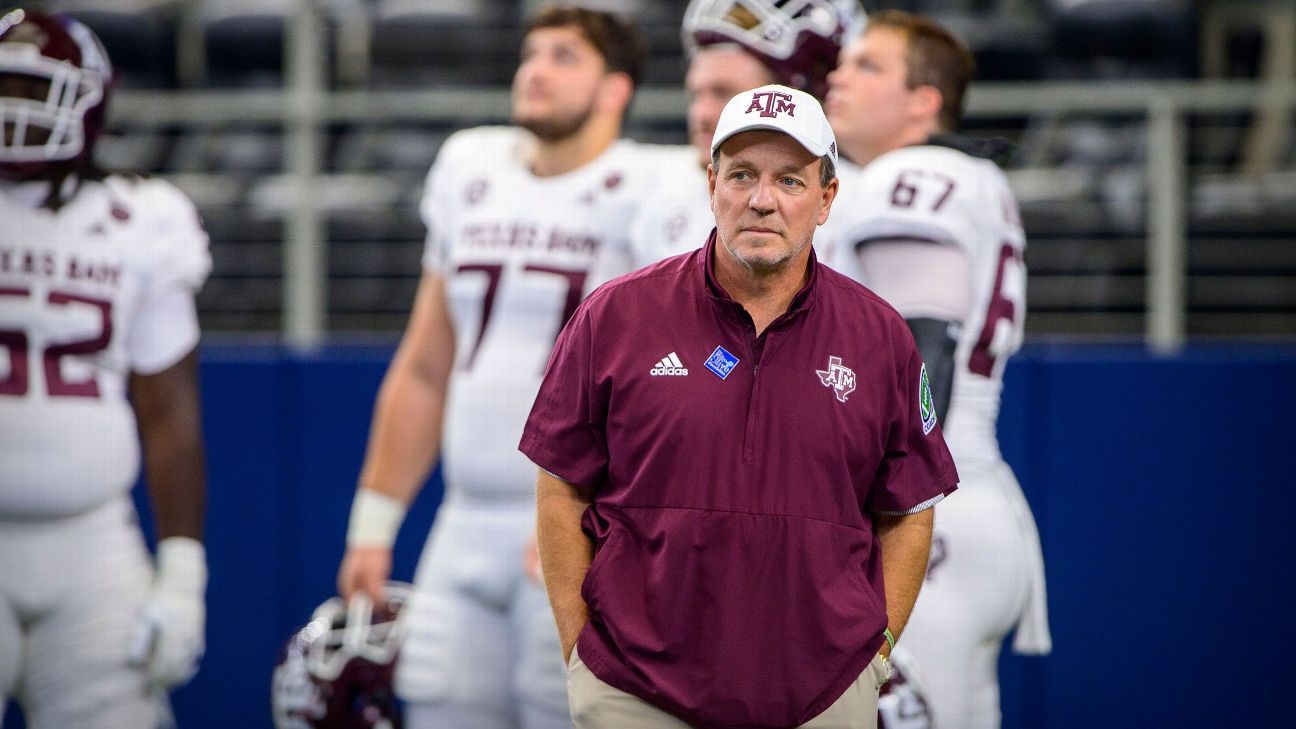 The sportsbooks were awfully tough to beat during the 2021 college football season. The top computer projections systems mostly finished under 50% against the spread, and closing line value was next to nonexistent.

We still had win totals, however. As I wrote following the regular season, my August SP+ win projections beat Caesars Sportsbook 60% of the time and won 74% of the time when it disagreed with the Caesars win total by at least one full win.

The final 2022 SP+ projections came out Sunday, and it appears the books are adapting here, too. While SP+ disagreed by at least one full win on 23 teams last year, there are only five such instances this time around. The books always adapt.

There are still solid bets to be found, however. Below, you’ll find full SP+ win projections — average wins (conference and overall), odds of bowl eligibility and odds of winning at least 11 games. You’ll also find 40 potential win total bets that I feel pretty good about. (Odds are from Caesars unless otherwise noted, and if 40 is too many for you, I’ve listed the 10 I’m most confident in at the bottom.)

Nebraska under 7.5 (-125). The entire world has the Huskers listed as bounce-back candidates after they lost nine games by single-digit margins last season. But that sentiment has likely gone a bit too far now. SP+, which has historically liked NU, sees only a 35% chance of clearing 7.5 wins.

Michigan State over 7.5 (-125). Just as Nebraska sentiment has overcorrected, I feel like MSU sentiment has done so in the opposite direction. The Spartans needed a ton of close wins to finish 11-2 and should regress in the win column, but SP+ thinks there’s only a 31% chance they fall under 8-4.

Minnesota over 7.5 (-130). The Gophers went 9-4 last season and are well-positioned to improve offensively. The schedule is manageable, and SP+ gives them a 68% chance of going 8-4 or better.

Indiana under 4 (-125). The Hoosiers are facing a brutal schedule as they attempt a rebound from last year’s sudden collapse. Odds of -125 mean a 56% break-even point, and their odds of falling under 4 are only 54%, but once again, the chance of pushing (25%) is higher than chance of losing the bet (21%).

Texas under 7.5 (-120). Is there a chance that the Longhorns catch fire with a fancy new quarterback (Quinn Ewers) and an improved defense? Absolutely. But betting against Texas hype pays pretty frequently, and SP+ only gives the Horns a 25% chance of hitting 8-4 or better.

West Virginia under 5.5 (-110). The Mountaineers’ roster has seen a lot of turnover, and a top-25 strength of schedule is pretty unforgiving.

Boston College under 6.5 (-130). I’m conflicted by this one, as SP+ doesn’t know that BC quarterback Phil Jurkovec only played part of last season, and the offensive projections are artificially low because of it. But the schedule doesn’t offer many toss-ups, and the Eagles will have to basically sweep them to hit 7-5 or better.

Clemson under 10.5 (-150). There’s a scenario in which all is again well with the Tiger offense and Clemson rolls to 11-1 or 12-0. SP+ only gives that scenario a 25% chance of coming to fruition, though. The offense was really bad last season.

USC under 9.5 (-120). I’ve been pretty open about the fact that I don’t think SP+ is right about the Trojans this year. We have no precedent for how much a team can improve after taking on close to 20 transfers, many of which are blue-chip players. They will absolutely play better than their No. 46 projection (and their odds of going 10-2 or better are greater than the 6% above), but 9.5 is still a high bar for a team that plays Utah and Notre Dame and still has loads of defensive questions to answer.

Arizona State over 6 (+110). On paper, this seems like one of the safest bets on the board — a 66% chance of going 7-5 or better, plus a 19% chance of a push, against 48% break-even odds. This all requires you to put faith in Herm Edwards and what is apparently a wonky team culture. But I’m sticking with it all the same.

Washington under 7.5 (-105). The Huskies should rebound in Kalen DeBoer’s first year in charge, but this bar’s a bit high, and SP+ only gives them a 35% chance of clearing it.

Notre Dame over 8.5 (-140, per DraftKings). Even with a high break-even point (58%), this appears to be one of the safer bets on the board. SP+ gives Marcus Freeman’s Fighting Irish a 76% chance of winning nine or more.

Navy under 4 (+110). SP+ has underestimated service academies at times, and if Ken Niumatalolo gets the QB position under control, the Midshipmen could rebound again. But SP+ has overestimated them of late and gives them only a 17% chance of clearing a four-win bar.

Temple over 2.5 (-140). I’m generally a “Bet the over on all 2s and 2.5s and bet the under on all 11s and 10.5s” person anyway, and while SP+ thinks Temple will be awful this season (124th overall), it still gives the Owls a 72% chance of finding at least three wins against a schedule that features home games against Lafayette and UMass.

Cincinnati over 9.5 (-115). Are the Bearcats CFP-caliber this year again? Probably not. But they only face one opponent projected higher than 40th.

Fresno State over 9 (-110). You have to trust that Jeff Tedford is properly energized and ready to resume the form he found early in his previous Fresno tenure (22-6 in 2017-18) and not in his final season there (4-8 in 2019). But he inherits a great roster from Kalen DeBoer and has a pretty easy schedule to boot, and SP+ gives the Bulldogs only a 21% chance of going 8-4 or worse.

Troy under 6.5 (-115). The Trojans should have one of the better defenses in the Sun Belt, but the offense must drastically overachieve projections for Troy to have a shot at seven or more wins.

Old Dominion over 4.5 (+100). The Sun Belt East is loaded, and there are only a couple of likely wins on the Monarchs’ schedule. But there are enough relative toss-ups that SP+ gives them a 61% chance of going 5-7 or better.

James Madison under 6.5 (-170, per DraftKings). JMU was one of FCS’ strongest programs for quite a while, but the Dukes lost a lot of the stars from last year’s FCS semifinal run, and they’re joining what might be the toughest division in the Group of Five. That makes 6.5 an awfully ambitious number, and it makes the under a pretty solid bet even with a lofty 63% break-even point.

Western Kentucky over 8 (+110). This one’s tricky, since both offensive coordinator Zach Kittley and quarterback Bailey Zappe (plus his top two receivers) are gone after last year’s offensive renaissance. But Kittley-esque co-coordinator Ben Arbuckle remains in town, and new QB Austin Reed was dynamite at the D-II level. SP+ gives the Hilltoppers a 58% chance of going 9-3 or better and only a 20% chance of going under. Even if the odds aren’t that great because of all the change, that’s quite a cushion.

Louisiana Tech under 5 (-110). The Bulldogs have won fewer than five games just once in the past eight seasons, but new head coach Sonny Cumbie has a ton of holes to fill and a schedule that features only three likely wins. SP+ only gives them a 25% chance of hitting 6-6 or better.

Western Michigan under 6 (-105). The Broncos have to replace many pieces from a dynamite passing game, and the defense probably can’t pick up the slack. The schedule features loads of relative toss-ups, and the odds of WMU going 7-5 or better are only 23%.

Central Michigan under 7.5 (-120). The Chippewas could be solid, but the schedule features trips to Oklahoma State and Penn State, meaning they’ll likely have to go 8-2 against everyone else to hit the over. SP+ only gives that a 33% chance of happening.

Ball State over 4.5 (-140). Things fell apart for the 2020 MAC champs last fall and might only get so much better in 2022. But the schedule is cushy, and SP+ gives the Cardinals a 71% chance of scrounging out five wins, good enough to overcome a 58% break-even point.

Kent State under 5.5 (-115). I don’t feel great about this one, as I think Sean Lewis is building something exciting with the Golden Flashes. But the schedule features trips to Washington, Oklahoma and Georgia, and SP+ only gives them a 35% chance of hitting 6-6 or better.

Eastern Michigan over 5.5 (-115). Chris Creighton’s Eagles will have to win some toss-ups, but SP+ gives them a 65% chance of winning at least six games, as they’ve done for four of the past five full seasons (so, not including 2020).

Best of the bets

If 40 bets is too many for you, here are the 10 that I probably feel the best about overall: