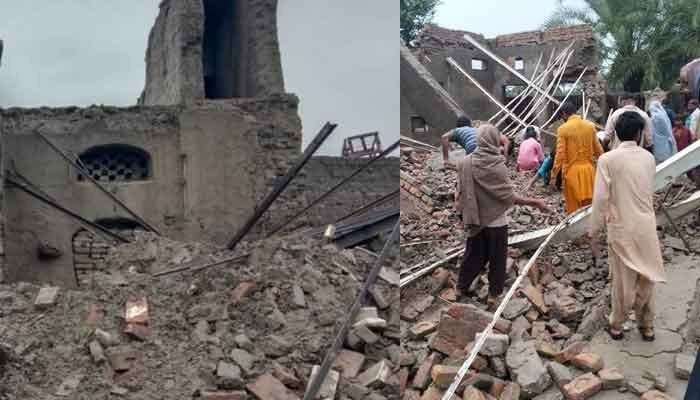 Heavy rains continue to ravage the province of Sindh, killing another 15 people in house collapse incidents in the districts of Sukkur, Shikarpur, and other areas and leaving hundreds of families stranded and homeless.

Six members of the same family died when the roof of their house collapsed in the Chak area of Shikarpur district. PPP Chairman Bilawal Bhutto-Zardari took note of the incident and directed Sindh Chief Minister Murad Ali Shah to provide immediate assistance to the deceased’s heirs as well as rehabilitation.

A woman named Shamaila died in district Sukkur when a wall of her house collapsed, while three children died in Rohri due to a roof collapse. Three children, Ehtesham, Bisma, and Kashyan, were killed in Gherelo when their house’s roof collapsed.

Meanwhile, in Hubbo Saeed Khan and Lakhi Ghulam Shah, two people were killed in a similar incident. Reports said that Akhairaj dyke broke near district Umerkot after the water level rose in LBOD, which inundated around 40 villages that included mud houses and cattle, while roads were washed away by the flood water.

The stranded people need rescue and relief as they lack access to Umerkot city. The rain victims in Khairpur, Sukkur, Qamber, and Dadu districts protested against the lack of facilities, such as tents, food, and shelter, and held the Sindh government responsible for their miseries.

Meanwhile, Foreign Minister Bilawal Bhutto Zardari on Tuesday appealed to the United Nations (UN) to help the flood-hit families. Speaking to the media in Shahdadkot, he said that there was a great need for tents in the affected areas of Sindh, adding that we all had to face the difficulties together. Too many houses and crops have been damaged. He also said that the Benazir Income Support Program will help the victims get help from the Sindh government.

Earlier, while chairing a meeting at the DC Office Qambar, Bilawal said that the unprecedented heavy downpour followed by hill torrents had wreaked havoc in the Qambar-Shahdadkot district and directed them to build embankments to save the main roads and arteries connecting different cities and towns from hill torrents.

He also directed CM Murad Ali Shah and elected MPs to work sincerely and energetically to serve the flood victims, terming their rehabilitation and rescue the biggest challenge for the provincial government.

Bilawal told the meeting that during his visit, he observed the Larkana-Shahdadkot Road that connects various towns and villages of both the districts flooded by hill torrents and ordered building embankments along the main road. Chief Minister Murad Ali Shah directed the chief engineer of irrigation to review the situation and deploy equipment to stop the erosion of roads by rainwater and hill torrents.

How bad is it?

In his briefing, Deputy Commissioner Qamber-Shahdadkot told the PPP chairman that 2,372mm of rainfall was recorded in the seven talukas of the district from July to August, in which 34 people lost their lives and 461 sustained multiple injuries in incidents of house collapse.

CM Shah said that another demand for 60,000 tents, 25,000 mosquito nets, 100,000 ration bags, 3,000 kitchen bags, 2,500 tarpaulin sheets, 30 dewatering machines, and six pumps has been received. “We tried our best to purchase tents, but they are not available. Therefore, I have requested the prime minister to arrange at least one million tents to cater to the growing needs of the province.”

On the occasion, Bilawal Bhutto said he had visited various relief camps where he noticed grief-stricken women who had lost their homes and livestock. “We have to take care of them with respect,” he said, adding he would only be satisfied when the affected families were sent back to their homes with dignity.

The chairman told the chief minister it was a great challenge for the PPP government in Sindh to rescue and rehabilitate people within the next few months. He asked the elected people of the area to work together to help the people and make arrangements for their basic needs. Bilawal directed the chief minister to keep reviewing the situation.

Murad Ali Shah said he was releasing plenty of funds only for the welfare of the affected people. “Food and medical facilities are being provided at the camps,” he said, adding that the displaced people who own cattle have settled along the roads where the cattle are being vaccinated.

Earlier, the rain victims in Qamber stopped PPP Chairman Bilawal Bhutto’s vehicle and protested against the apathetic attitude of the elected representatives from Larkana and Qamber-Shahdadkot. They complained that no one had come to their help when their properties were being devastated by floods and they escaped from their villages to save the lives of their families. Bilawal Bhutto directed CM Sindh to quickly address the grievances of the rain victims.

Talking to the media persons near Latifabad Boulevard Mall, Sharjeel said that earlier it was decided that the Sindh Solid Waste Management Board would be inaugurated on September 9, but keeping in view the current unclean and shabby conditions after recent heavy rains in the city, Chief Minister Sindh Murad Ali Shah directed the board to work from today (August 23).

“The work of lifting large heaps of garbage has already started in Hyderabad,” he said. He said that from September 9, the work of collecting garbage from houses and streets would also start, which would be dumped at the landfill site near Lunikot and Mulla Katiyar.

Regarding the current situation of rain, he said that there were breaches in the embankments of Rahuki Canal last night and he had to rush there to get them plugged. He said Bilawal Bhutto Zardari and the chief minister were visiting all the districts of Sindh and monitoring the rainfall situation across the province, while members of the provincial cabinet too were in the field to supervise relief and rescue activities in the rain-affected areas.

Memon said that the situation in Sindh was not good due to heavy rains which had inundated the urban and rural areas. To a question, he said the chief minister had requested the prime minister for financial assistance, who had assured him it would be provided under the Shaheed Benazir Bhutto Income Support Programme and houses would be constructed for the displaced persons by the government. The minister said that rain-affected people were being provided tents and cooked food, adding that encroachments had also been removed to ensure drainage of rainwater from urban and rural areas, including Latifabad.

To a question, he said Imran Khan had the support of countries like Israel and India who wanted to destabilise Pakistan. “I ask the people and the institutions not to come under his pressure as the country can ill afford any mischief and conspiracy at this time.” MNA Tariq Ali Shah Jamote, MPA Abdul Jabbar Khan, Deputy Commissioner Hyderabad Fuad Ghaffar Soomro, and Administrator Hyderabad Fakhir Shakir were also present on this occasion.

Earlier, Sindh Minister for Information Sharjeel Inam Memon monitored the condition of rain, drainage work, and relief and rescue activities in District Hyderabad. He also visited parts of his constituency Taluka Hyderabad (Rural), Mir Colony of Tando Jam, main Tando Jam city and Malakand Chowk UC Sanon Gopang. He also visited a relief camp set up for the rain-affected people in Taluka Hyderabad (Rural) and met with the affected families there and also directed the officers to ensure provision of food, medical and other basic facilities.

During a visit to village Bader Memon, Pisakhi, Haji Ibrahim, the rain-affected people complained about their collapsed houses, mosquitoes and the lack of drainage of stagnant water around their villages and fields. The Sindh information minister directed the officers to ensure drainage and early survey so that compensation could be quickly arranged.

Meanwhile, the European Union has said it is providing €350,000 (around Rs76 million) to Pakistan to help flood-affected people. The aid will focus on addressing the urgent needs of those most affected in some of the hardest-hit districts of Jhal Magsi and Lasbella in Balochistan. “The devastating floods have left a trail of destruction in Pakistan, causing many to suffer the loss of their homes, livelihoods, and belongings,” said Taheeni Thammannagoda, who oversees EU humanitarian programmes in Pakistan. “The EU funding will help get vital assistance to the most vulnerable people to support them during this hard time.”

She said the assistance would support the International Rescue Committee in delivering much-needed assistance. “This assistance includes the provision of cash transfers to help flood-stricken families meet their immediate needs and primary healthcare services, with a focus on water-borne and communicable diseases, which are common after a flood, as well as nutrition support. The programme will also provide psychological support to vulnerable groups such as women, adolescent girls and children,” she said.

The EU representative said that funding by her organisation was being made available via the European Civil Protection and Humanitarian Aid Operations (ECHO) of the European Commission, through its Small Scale Response mechanism.