12.3 C
Los Angeles
Sign in / Join
Home Sport Fixture congestion: Which Premier League games are postponed and when will they... 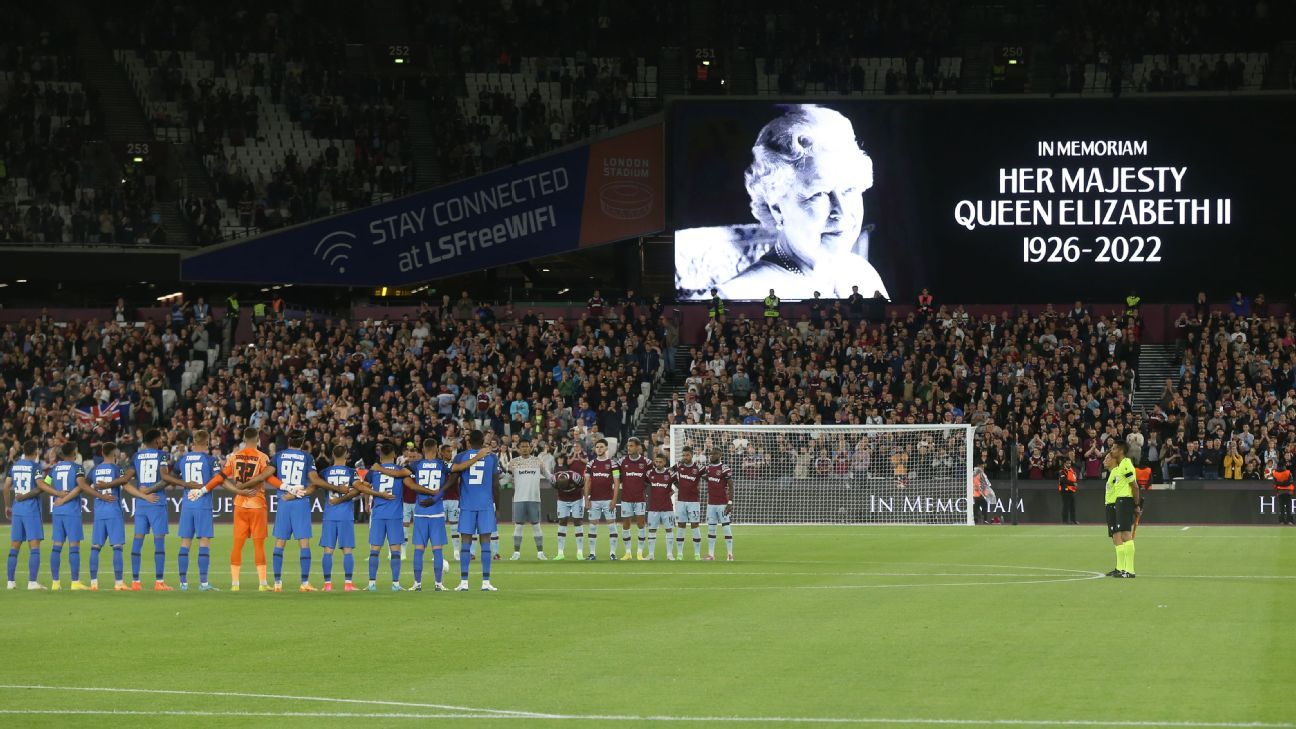 The Premier League postponed all games that were due to be played from Saturday through Monday as a mark of respect after the death of Queen Elizabeth II at the age of 96.

Further problems have been caused by security requirements around the funeral, with three more Premier League games and a Europa League match called off.

Calling off matches in a season that has been truncated by the winter World Cup, which kicks off in Qatar on Nov. 20, means finding a place to play the games is no easy task.

Here we take a look at the games that have been called off and possible solutions.

This article will be updated with all the latest information as the situation develops.

Which Premier League games have been postponed?

All matches in the seventh round of fixtures and three matches this coming weekend.

Brighton vs. Palace was postponed last week due to a planned train strike. That industrial action has now been canceled, but as the game is a high-risk match for policing, close to London involving a London club, it will not be reinstated.

Chelsea vs. Liverpool is a high-category game which was due to be played in London.

Man United vs. Leeds is off “due to Greater Manchester Police supporting forces across the United Kingdom at locations and events of high significance following the passing of Her Majesty Queen Elizabeth II.” Even though it isn’t taking place close to London, it carries the highest category of match and requires over 900 police officers. Members of the Greater Manchester force have already been deployed to Scotland where the Queen’s journey to London will begin, and further officers from the region will need to be sent to London. It means there isn’t the resources to stage such a game in Manchester.

Which games can still go ahead and why?

Seven games remain this weekend, even though two of those will be in London.

Spurs vs. Leicester on Saturday and Brentford vs. Arsenal on Sunday are not in the high risk category and can be policed, unlike the three which have been postponed. .

The Premier League schedule this weekend is:

What about the games in European competition?

Police resources will be required for the days leading up to the funeral on Sept. 19. Rangers’ Champions League game against Napoli, which was scheduled to be played Tuesday, has been moved to Wednesday because of the resources needed while the Queen’s coffin, which is to be flown to London on Tuesday evening, is in Scotland.

– Olley: How Premier League came to a stop

Chelsea vs. FC Salzburg will go ahead as planned on Wednesday. The Queen’s coffin will be transferred from Buckingham Palace to Westminster Hall in an official procession earlier that day, but FC Salzburg fans coming from Austria is rated a low risk.

The Queen’s coffin will lie in state at Westminster Hall in central London from 5 p.m. on Wednesday through to Sunday. Hundreds of thousands of people will flock to London over these three days to pay their respects, requiring a huge police presence.

Arsenal’s Europa League home game against PSV Eindhoven has therefore been postponed “due to the severe limitations on police resources and organisational issues related to the ongoing events surrounding the national mourning for Her Majesty Queen Elizabeth II.” The fact so many fans will travel from the Netherlands for the game is said to be the major issue.

All other games go ahead as planned.

When could Arsenal play PSV Eindhoven?

During the COVID-19 pandemic there were special conditions that would enable a team to play a postponed game after the group stage had ended, but this has now expired.

When Spurs were unable to play Stade Rennais last season, they could not find a new date and the French club were awarded a 3-0 victory by default. Different circumstances are at play here, but the Gunners could have to forfeit the match if they cannot play PSV.

When could the postponed Premier League games be played?

This is the big question, and there is no available date in 2022.

Every midweek after the upcoming international break through to the start of the World Cup is being used; four rounds of European games, a full set of Premier League matches and the third round of the Carabao Cup.

English football restarts on the midweek of Dec. 20 — just two days after the World Cup final — with the fourth round of the Carabao Cup, followed by three blocks of Premier League matches over the Christmas period.

This list shows how congested the schedule will be in 2023, with only three vacant midweeks built in through to the final day of the Premier League season on Sunday, May 28.

Teams who have been knocked out of the Carabao Cup or FA Cup in an earlier round could use those matchdays if necessary, though it becomes complicated if that league game is due to be shown on TV as it shouldn’t be scheduled against the broadcaster of the cup competition.

The midweeks in late January reserved for the Carabao Cup semifinals offer a solution — but there will still be four clubs ruled out, and the same issue with the TV clash applies.

So just play the games in the vacant midweeks?

It’s not quite that simple, as those three vacant midweeks are there for a reason. The clubs involved in the Carabao Cup final (Feb. 26) plus the FA Cup quarterfinals (March 18) and semifinals (April 22) will all need to rearrange the three league matches scheduled for these dates, and that’s primarily what the vacant slots are for.

It’s especially a problem for teams who go far in a European competition as there is little room for manoeuvre. If a club were to reach the final of the Carabao Cup, and the semifinals of the FA Cup and the semifinals of either the Europa League or the Europa Conference League, there are only just enough available dates to rearrange the three league matches from the dates outlined above. Add in any more rearranged games, and there is no natural slot.

It’s slightly different for a team that reaches the Champions League final, as Liverpool did last season when also reaching the finals of the FA Cup and Carabao Cup. Clubs in the UCL have two extra spare midweeks during the round of 16, which Liverpool used to play Leeds United and Arsenal, thus avoiding added congestion further into a season which had already been affected by COVID-19 postponements.

The Premier League has to look at these dates and take into account the worst-case scenario.

What about the European midweeks?

There is a Memorandum Of Understanding between the leagues and UEFA that matches won’t be played at the same time as Champions League matches, if at all possible. In 2013, UEFA fined the Premier League £1.1m for doing so, deducting funds from solidarity payments. This has been relaxed in recent years, though leagues are still advised to avoid a clash if possible.

Last week, Lorient played Lyon in Ligue 1 in a game postponed from the beginning of the season. It was scheduled on a Thursday to avoid a clash with the UCL, kicking off early at 7 p.m. local time so it would only be on at the same time as the early set of European matches.

So the Premier League could use the European midweeks if it feels there is no other place to put the games, and that applies to 13 of the 20 Premier League teams.

Of course, that could be no good to the other seven teams who are in Europe: Arsenal, Chelsea, Liverpool, Manchester City, Manchester United, Tottenham Hotspur and West Ham United.

It’s those clubs who pose the problems for the schedulers — especially now that Chelsea, Liverpool and Manchester United have had a second game called off.

But at the same time, it presents a solution, of sorts. And it tells us where the problem lies.

As mentioned previously, teams who go through in the Champions League will have two extra midweeks in February and March, as the round of 16 is spread across four midweeks and teams will play on only two of them.

It’s a similar story for teams who win their Europa League or Europa Conference League group. They will go straight through to the round of 16, and not play in the two European dates in February.

So what’s the solution?

It’s really all about the eight postponed games involving those teams in Europe.

The Premier League will probably hope to fit everything in on the vacant midweeks, which won’t be a problem as long as clubs avoid the Europa League and Europa Conference League knockout round in February.

But that is very much a case of hoping disaster doesn’t strike. Where would Chelsea, Liverpool or Man United play these two games if they were to play in Europe in February and do well in the domestic cups? There isn’t space.

If it’s decided there needs to be some creative thinking the obvious solution is to cancel FA Cup replays in the third and fourth rounds once again. This happened in each of the last two seasons due to congestion caused by COVID-19 postponements and would open up the two extra midweeks required to prevent any issues further down the line.

If FA Cup replays stay in place, it’s unlikely, though not impossible, those dates could be used for rearranged games because the availability of teams would only be known at short notice.

There’s no chance the Carabao Cup could be cancelled, but there could be pressure to make the semifinals one-legged to open up a midweek. Again, this is an unlikely outcome.

Swapping around the FA Cup final (June 3) and the last day of the Premier League (May 28) would add an extra midweek on May 30 — though the Europa League final is being played on the Wednesday of that week. There would also be additional logistical issues, as Wembley is booked for the EFL playoffs on the weekend of May 27-29, making this solution very unlikely, too.

Can the season be extended?

No. After the FA Cup final on June 3, the Champions League final is scheduled for June 10 and immediately afterward there’s an international block reserved for Euro 2024 qualifying matches.

Simmering tension, a ‘declining player’ and a public breakup: Inside Seattle’s trade of Russell Wilson