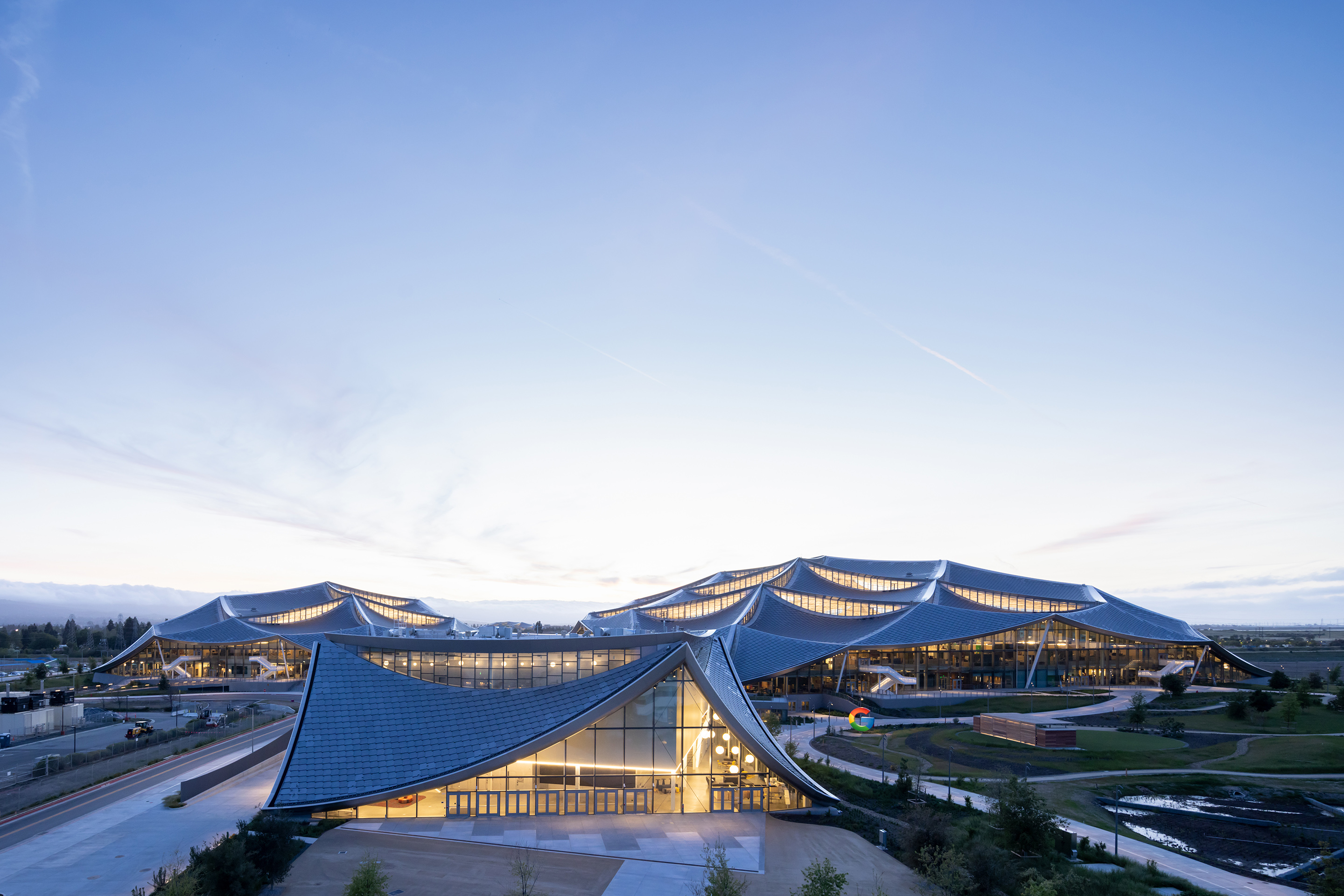 For more than a year, U.S. Department of Energy researchers in the foothills of Colorado’s Rocky Mountains have been working with Google on a way to let drivers easily choose routes that produce fewer greenhouse gas emissions. After launching the service in the United States in October and Canada and Germany this year, the tech giant is expanding the program to other European nations.

Eco-routing, which displays a small leaf next to the Google Maps directions with the lowest carbon footprint, is just one of many initiatives Google has launched to help others achieve “deep decarbonization” as it works toward its own net-zero emissions target in 2030. The efforts have the added benefits of boosting the company’s standing with investors who prioritize environmental, social, and corporate governance (ESG) standards.

The app feature has reduced greenhouse gas emissions by more than 500,000 metric tons, the company said last week. That’s the equivalent of getting 100,000 fuel-burning cars off the road. While it isn’t as impactful as electrifying the transportation sector, the initiative illustrates Google’s three-pillar approach to climate change: decarbonizing its operations and supply chain, using its technology and data to enable cities and businesses to calculate their carbon footprints, and helping consumers make sustainable choices.

With its 2030 net-zero goal, Google has one of the most aggressive sustainability plans among Big Tech companies. Microsoft is also a leader, aiming to be carbon-negative by that year. Amazon, a big player in the energy-hungry world of data centers, aims for net zero by 2040. Apple’s goal is to be carbon-neutral across its supply chain and products by 2030, adding to the carbon neutrality it already claims for its global operations.

These companies’ products and services are already widespread in developed nations, but Google holds a unique spot in the sustainability push because of its involvement in people’s everyday decisions about transportation through Google Maps and Google Flights. And its Nest smart thermostats can affect daily household energy-use decisions.

“We have this incredible privilege as Google to have products a billion people use every day,” Brandt told Fortune in an interview. The company has been focused on building features into core products that help everyday folk make sustainable choices, such as choosing a driving route that uses less fuel with the eco-routing function in Google Maps.

“We see individuals as a piece of the puzzle,” Brandt said. “If we can show them what are the most meaningful actions and make that an easy choice, a better choice, a cheaper choice, that is hugely beneficial.”

The company’s understanding of how to go about sustainability has evolved since it committed in 2012 to buy enough renewable energy to match all of its operations.

“We didn’t even know how we were going to get there at the time, and what we really learned along the way was it requires ecosystem change and that these changes can only happen in partnership,” Brandt said.

In 2018, Google teamed up with the California Academy of Sciences and the Ellen MacArthur Foundation to create an interactive online tool called Your Plan, Your Planet. The site has evolved to its current iteration that provides tips to people interested in reducing food, water, and energy waste and prolonging the life of consumer products.

“This was really, I think, our first visible step in thinking about how do we use technology to make the sustainable choice the easiest choice,” she said.

Now, in addition to the stand-alone web tool, those energy-saving ideas are incorporated into the company’s consumer-facing efforts including its shopping, flights, and hotels search features and its Nest smart thermostats. For example, when someone uses Google Flights to search for airline travel options, the search tool displays the amount of carbon dioxide emissions along with the flight’s price and travel time.

“In Google Shopping, you can now see when you’re searching for a hot water heater, it’ll give you prompts to consider a heat-pump water heater,” Brandt said. The Nest thermostat also prompts people to consider turning down their thermostats at optimal times.

Part of Google’s environmental collaboration has been with its own employees, some of whom signed a letter in 2019 asking the company to establish several sustainability goals. They included having zero greenhouse gas emissions by 2030; banning contracts that enable fossil-fuel extraction; and no longer funding think tanks, lobbyists, and politicians who work to undermine climate-change action. That letter followed a Guardian report that the company had made “substantial” contributions to more than a dozen organizations “that have campaigned against climate legislation, questioned the need for action, or actively sought to roll back Obama-era environmental protections.”

The letter also followed a pledge signed by more than 2,000 Google workers who organized with employees at Amazon, Microsoft, Facebook, Twitter, and other tech companies to strike and demand a “livable future for all of us.” That pledge letter said Google’s cloud business brings in “significant revenue licensing infrastructure, machine learning, and engineering talent to fossil-fuel companies.” It also said that in 2018, the company funded 111 members of Congress who voted against climate legislation most of the time. Additionally, that letter called out the company for having no set date for achieving carbon-free energy consumption.

While Google has set its net-zero goal for 2030, its progress on the other demands are less clear. In 2020, Google said it would stop making customized A.I. or machine learning tools for the oil and gas industry. But that same year, the company announced a deal with Saudi Aramco, the world’s largest oil company, to expand cloud services in Saudi Arabia. Google has said that the deal doesn’t involve oil production.

In June, the shareholders of parent company Alphabet considered a proposal calling on the company to specifically evaluate whether its lobbying activities directly, or indirectly through trade associations and other organizations the company funds, align with the Paris Agreement’s goal to limit average global warming to 1.5 degrees Celsius. The company said the climate lobbying proposal was “unnecessary and duplicative” because of existing lobbying disclosures, and shareholders ultimately voted down the proposal.

When asked about whether or how the 2019 employee letter affected Google’s trajectory on climate change, Brandt said the company has been focused on sustainability since its founding.

“Part of that is because we are a group of people that care deeply about this, and I’ve always seen our employees as being really key to this effort,” she said, pointing to the company’s policy that lets employees dedicate 20% of their time to side projects. Project Sunroof, a calculator that helps map rooftop solar potential, started as one such endeavor. Another was a project applying machine learning to create an artificial intelligence system for cooling data centers.

Externally, the company is focusing on helping cities become more sustainable. One of its tools, Environmental Insights Explorer, is designed to enable local governments to better understand building and transportation emissions and the solar potential for rooftops.

“We’re increasingly bringing in other data sets,” Brandt says. “And this is available today for about 42,000 cities around the world.”

One Environmental Insights Explorer feature involves using mobile air sensors to capture street-level air pollution data in Copenhagen, Amsterdam, and London. It also has a tree canopy mapping feature available for 14 U.S. cities, including Chicago, Miami, Los Angeles, Austin, and Denver. Cities can use the data to create tree-planting plans to reduce the risks of heat islands that can lead to heat-related deaths.

When asked how much greenhouse gas emissions Google’s overall three-pronged strategy has helped the world avoid, Brandt said the company has set a target of “enabling a billion new sustainable actions” this year and added, “We are very much interested in exactly what you’re asking about, of how do we also really quantify that impact.”

One challenge with totaling the carbon savings from all of Google’s programs can be the precision of very granular emissions data. For example, the company used to include data on airplane contrails, which increase the carbon-dioxide equivalent estimates for search results in Google Flights. But it later removed contrail information because current scientific knowledge means it can’t be calculated accurately on a per-flight basis. That substantially lowers the emissions estimates for each flight.

Google does know that its Nest thermostats have helped save more than 100 billion kilowatt hours of energy since 2011. Brandt said the eco-friendly driving option launched in Google Maps last year will enable drivers to avoid about a million metric tons of carbon annually.

That bolsters the environmental résumé of a company that says its operations have been carbon-neutral since 2007 because of offsets. Google became the first major company to match all of its yearly electricity use with renewable energy in 2017.

Still, Google’s operations produced the equivalent of more than 6.7 million tons of carbon dioxide last year that it had to offset with renewable-power purchase agreements and carbon credits, and that doesn’t include the bulk of its scope-three emissions.

It’s an illustration of the conundrum faced even by companies like Google with deep pockets and aggressive environmental goals: There aren’t enough regional renewable energy sources to power all its operations, much less those of all its suppliers.

The investment community sees Google as a leader among tech companies when it comes to environmental sustainability. But the search giant and other Big Tech companies also face ESG concerns that go beyond their role in climate change.

Because of Google’s carbon-neutral operations and leadership in renewable-energy use, Earth Equity Advisors used to include it in its Green Sage Sustainability Portfolio. But it sold the company’s shares due to privacy concerns about how Google uses and monetizes consumer data, CEO Peter Krull explained. Privacy is a factor in the firm’s sustainability reviews because the way companies treat people contributes to a healthier population, he said.

Still, Earth Equity reviews Alphabet twice a year when it rebalances the portfolio.

“I really like what Google is doing overall from a sustainability perspective,” Krull said. “Their goal to be carbon-free by 2030 is impressive. So, it’s entirely possible that we put them back into the portfolio.”

Google has added momentum to the snowballing ESG trend, As You Sow’s Stewart noted. The company is a high-profile example for investors who want to see more renewable-power purchase agreements and net-zero targets from public companies.

Brandt said the company’s overall multi-pronged approach to sustainability is “a long-term bet for Google.”

Part of that strategy is going beyond the carbon offsets that have enabled its carbon neutrality claim for its own operations. In addition to its goal of achieving net-zero emissions across its operations and value chain, including its consumer hardware products, Google aims to become the first major company to run on carbon-free energy all the time.

The 24/7/365 carbon-free goal is ambitious, with Brandt calling it “one of our Google moonshots.” That high-bar goal will be powered by the company’s deep pockets and informed by years of an evolving sustainability strategy that has come to involve a network of disparate players, including local governments, around the globe.