12.3 C
Los Angeles
Sign in / Join
Home Sport How the Connecticut Sun saved their season for another shot at a... 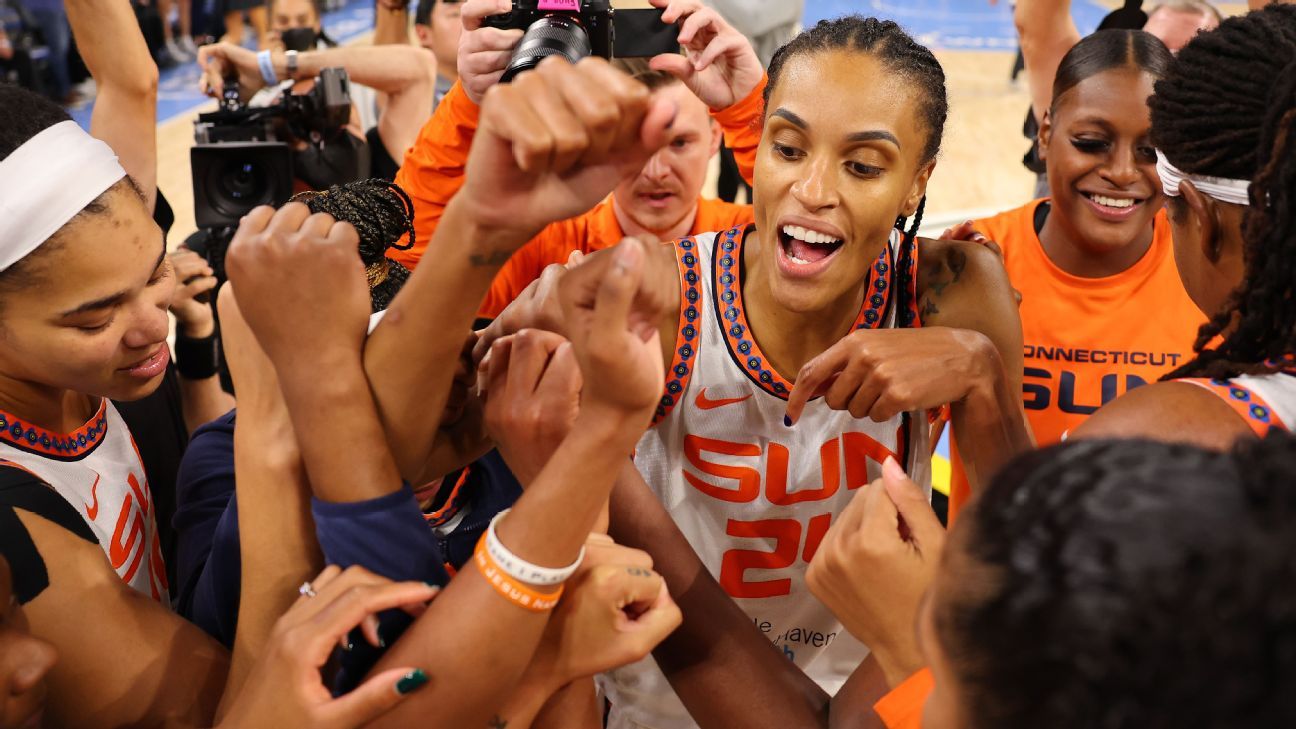 Jonquel Jones, Alyssa Thomas and Brionna Jones sat at the podium following the Connecticut Sun‘s 67-64 loss at the Las Vegas Aces on Sunday in Game 1 of the 2022 WNBA Finals. Outside of the first few minutes, it was the sort of game played to Connecticut’s liking stylistically — more defensive slog than high-scoring affair. The Sun had a chance to tie the score coming out of a timeout with 13.4 seconds to play, but DeWanna Bonner misfired a 3-point attempt, allowing the Aces to come away with the win.

It would have been easy for the Sun to fixate on what could have been: snatching a coveted road win in front of a boisterous, adversarial crowd, especially after controlling the majority of the first half and leading by as many as eight points early in the third quarter. Instead, the players’ tone in the postgame news conference was composed. Unshaken, even.

“After this game, we have to have a lot of confidence,” Thomas said. “I mean, this is a three-point game, and we had a chance to tie. I think we are very confident, and we know that all you need is one [win] and then there’s two games at our place.”

As Jonquel Jones added, “Ultimately, I’m happy with the game that we played, and we gave ourselves a good opportunity to come out there with a win, and it just didn’t go our way. But we are excited about Game 2.”

The confidence the Sun channeled Sunday didn’t come out of nowhere. Facing elimination in the semifinals, veteran forward Bonner called a players-only meeting following their crushing Game 3 home loss to the Chicago Sky on Sept. 4. The meeting rekindled an air of levity and belief that saved Connecticut’s season and propelled the Sun to their first Finals appearance since 2019; and continuing to play that way remains critical for the Sun to overcome a 0-1 deficit in the Finals and win the franchise’s first WNBA championship.

“I don’t even know if we found that confidence at all in the playoffs until we won that Game 4, and then it was like, ‘All right, let’s go,'” Bonner said. “‘This is how we want to play. We want to have fun. We can’t have fun if we’re playing uptight.'”

Aside from their Finals counterpart, no team over the past four years has knocked on the door of winning a title as repeatedly as the Sun. Counting its early franchise history, which featured WNBA Finals appearances in 2004 and 2005, Connecticut has the unfortunate distinction of having the most playoffs wins without a title (36).

In the 2019 Finals, the Sun took the Washington Mystics to a decisive Game 5 before Washington surged late to capture the championship. The Sun reached the semifinals the next two seasons, in 2020 without Jonquel Jones (opt-out) and in 2021 without Alyssa Thomas (Achilles tendon tear) most of the summer but fell short of advancing both times.

Things were looking up in 2022 before longtime point guard Jasmine Thomas sustained a season-ending ACL tear in May. Bria Hartley, brought in to shore up the team’s backcourt depth, suffered the same injury three games into her Sun career. The team also experienced a personal tragedy when coach Curt Miller’s mother died in August.

Most teams facing an uncertain offseason assert that the future is not top of mind, but the Sun haven’t shied away from talking publicly about their closing championship window. Sixth Player of the Year Brionna Jones as well as starters Courtney Williams and Natisha Hiedeman are all free agents heading into the offseason.

The weight of it all was apparent as the Sun burrowed through the postseason, but especially in Game 3 of the semifinals, with the series tied. Connecticut played its preferred “messy” style of basketball but couldn’t cross the finish line at home, uncharacteristically missing 39% of its shots within 5 feet of the rim. Miller, who was miked up during the game, was caught saying on national television he was “going to get fired because we can’t make a layup.” After a tough night against Chicago’s length, Jonquel Jones, the 2021 WNBA MVP, sat most of the contest’s closing minutes — a move criticized by some fans — as Miller sought to finish with a smaller lineup centered around Brionna Jones.

What happened next had the potential to make or break their season. And so Bonner approached Miller after the game, insisting that instead of watching more film the team hold a players-only meeting.

Bonner said she saw a nervousness and tightness holding back the Sun — that they were playing to not make mistakes, to not lose.

“I just sat everybody down, I said, ‘Come on, this is not us,'” Bonner said. “‘Let’s just play like whatever happens happens. They kicked our ass anyways, so why not just play?'”

Bonner, at 34 the eldest player on the roster and the only one to win a title, boasts the experience and pedigree to hold the team accountable, as she was part of the Phoenix Mercury‘s championship teams in 2009 and 2014, when she played alongside Diana Taurasi, Cappie Pondexter, Brittney Griner and Penny Taylor.

“DB is a champion,” Sun guard Hiedeman said of Bonner. “She’s been there. She knows what it takes. Her speeches have been on point lately, so we’ve been feeding off of that. … She’s leading the way, and we’re following.”

Miller’s instincts are always to overprepare, but he said, “In that moment, DB having a heart-to-heart with our team is what they needed, and they’ve absolutely thrived off of it.”

The Sun burst out of the gates against the Sky in Game 4 with some of the best offensive flow and movement they’ve had in a long time, setting a WNBA playoff record with 66 points in the paint and, Miller said, making them confident they could play messy and disruptive on the defensive end while still finding success offensively.

Bonner, who has competed in 70 postseason games, said Game 4 felt unlike any other playoff game she has ever played in.

Miller acknowledged that folks like him and the notoriously intense Alyssa Thomas are very competitive in contrast to players such as Jonquel Jones and Courtney Williams, who have upbeat personalities and play better when they’re having fun. But staying loose was what this team needed to rediscover its groove.

Game 5 in Chicago wasn’t entirely fun for the Sun, especially in the third quarter, when their offensive execution was in shambles against the Sky’s empowered defensive aggression. The Sun faced an 11-point deficit early in the fourth, but their defense stayed strong, while forcing the issue in transition to claw at the lead. They finished the game on an 18-0 run to send home a flummoxed Wintrust Arena crowd.

The Sun found ways to move the ball well in the second quarter of Game 1 of the Finals, when they outscored the Aces 21-9, and Connecticut finished with 18 assists on 28 baskets as compared to Las Vegas’ eight assists. But the Sun were more stagnant in the second half, allowing Las Vegas to go on its run; and while their guard efficiency thrived in Games 4 and 5 of the semifinals, Bonner and Williams combined for just eight points on 3-for-18 shooting from the field on Sunday. At times, Connecticut seemed unaware of the shot clock, and Miller thought his team didn’t always take advantage of the opportunities it got against the Aces’ zone.

To even the series on Tuesday (9 p.m. ET, ESPN), before it heads east to Uncasville, Connecticut will have to come out with renewed dedication to offensive execution, something that — as the semifinals and even parts of Sunday’s Game 1 proved — tends to be easier the looser and freer they’re able to play.

And an early 0-1 deficit? As Jonquel Jones posted on Instagram on Sunday evening, “We just getting started.”

“I think if we stay together, anything is possible with this team,” Bonner said at the conclusion of the semifinals. “What we’ve been through this year … it’s just been crazy. We’ve just been so relentless.

“We work so damn hard, but don’t count us out yet. Because we are relentless.”