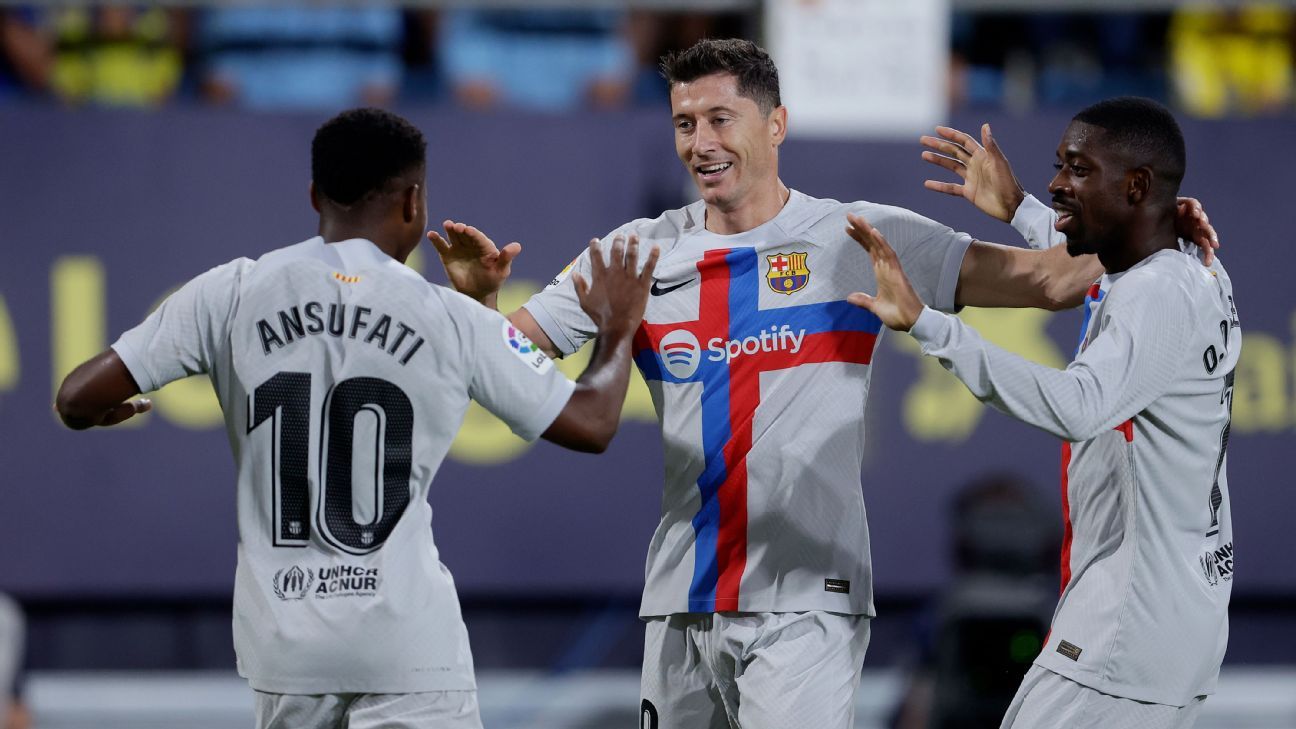 Robert Lewandowski came off the bench to score one and make another as Barcelona beat Cadiz 4-0 on Saturday in a game that was delayed by over 50 minutes because of a medical emergency in the stands.

Barca were 2-0 up with 10 minutes to play when the game was halted after a supporter suffered an apparent heart attack. Cadiz goalkeeper Jeremias Ledesma and substitute Jose Mari helped get a defibrillator and a stretcher to the supporter, who was later transported to a hospital. Cadiz president Manuel Vizcaino confirmed the fan’s condition was “stable” and the match eventually restarted.

Prior to that, Frenkie de Jong had given Barca the lead with his first goal of the season, before Lewandowski made it two from close range. Lewandowski then set up the third for Ansu Fati after the restart, with Ousmane Dembele adding the fourth in stoppage time.

1. Lewandowski stars again as Barca make it five wins in a row

Lewandowski can’t stop scoring. He needed just eight minutes after coming on as a substitute against Cadiz to score his ninth goal of the season, those goals coming in just six appearances. He then showed power and strength to tee up Ansu for Barca’s third goal.

Barca were already in the lead when Lewandowski came on in the 57th minute, but only just. They had struggled to break down a Cadiz side that still haven’t scored this season, until De Jong’s opener in the 55th minute. The Dutch midfielder’s first goal since February came after good work from Gavi, and the goal also arrived with Lewandowski, Dembele and Pedri stripped on the sideline and ready to come on.

Despite the goal, Xavi stuck with his decision to bring the trio on, and it didn’t take Barca long to finish the game off from there.

Barca have now won five matches in a row in all competitions and temporarily sit top of LaLiga ahead of Real Madrid‘s game against Mallorca on Sunday. What will please Xavi is how they are finding different ways to win. They have struggled to break down teams that sit deep against them under Xavi — they had only won two of the last six matches they were drawing at the break before Saturday — but they found a way through at the Estadio Nuevo Mirandilla.

Next up is a trip to his former club, Bayern Munich, in the Champions League on Tuesday.

2. Nine changes with Bayern in mind, but chances not taken

Lewandowski, Dembele and Pedri were all on the bench because Xavi picked his side with Bayern in mind. Barca made nine changes to the team that beat Viktoria Plzen 5-1 in the Champions League in midweek, and it told in a disjointed first-half performance.

There was a debut for Hector Bellerin, who did OK at right-back and helped set up the second goal, and we saw a first start of the season for Gerard Pique in defence. In attack, there were chances for Ferran Torres and Memphis Depay to stake their claim for more regular football.

However, both flattered to deceive and were taken off early in the second half for Lewandowski and Dembele. Ferran will get more chances as he comes back from an injury that sidelined him in preseason, but Memphis might not be so lucky. The Dutch forward nearly left in the summer, but eventually stuck around as the sixth-choice forward after Pierre-Emerick Aubameyang‘s move to Chelsea.

The last thing a team that are bottom of the league without a point or a goal in four games normally wants is a visit from Barca. Cadiz, though, could have been forgiven for welcoming a game against Xavi’s men.

Since they returned to LaLiga in 2020, they had not lost to Barca, beating them twice and drawing twice, scoring four goals and conceding just two. But that run ended on Saturday and Sergio Gonzalez’s side, even at this early stage of the season, look in trouble.

Cadiz have lost all five of their LaLiga fixtures to date, failing to score a single goal and conceding 12 in the process. It cannot be understated how important Friday’s trip to Real Valladolid is — for them and for Gonzalez’s future.

There were a few decent performances on Saturday. Alejandro Balde did well at left-back, De Jong produced perhaps his best display of the season and Lewandowski was brilliant off the bench, but Gavi stood out with his energy and quality, and he also helped set up the opening goal.

It’s not easy coming into the side for minutes here and there, but that’s the situation Memphis finds himself and there is pressure to deliver at Barca when a chance comes your way. He did not step up at Cadiz.

What a moment for De Jong, eh? His first goal since February has clearly been worth the wait.

FRENKIE DE JONG SCORES HIS FIRST GOAL OF THE SEASON FOR BARÇA 🙌 pic.twitter.com/Ez90zSEphd

Then came the sudden stoppage due to a medical emergency in the crowd. Thanks to some swift actions, the fan’s condition was stabilized.

What a photo. Cádiz keeper Conan Ledesma catching a defibrillator before racing across to hand it to the emergency services who were attending to the fan who had collapsed in the crowd. https://t.co/X8X7B58EYW

Barcelona acknowledged as much after the match, noting that the result wasn’t the main thing to take away from Saturday.

Today, there were more important things than football. pic.twitter.com/MMwjN6KzLD

After the match: What the managers, players said

“[The medical emergency] was not a nice situation for anyone. Health and people’s lives always come before anything else. Luckily they were able to revive the person and they are healthy and safe. We felt, both teams, that it was right to restart the game. We hope the supporter recovers quickly. The game is secondary at the moment, but it was an important win at a difficult place to come. We created a lot of chances, dominated the game and it’s three points to keep in touch at the top of the table.” — Barca coach Xavi

“Obviously we are all affected by what happened. Hopefully it was just a scare in the end. Football is for people to enjoy themselves. It is a privilege to have the supporters we have, there were an example of humanity during what happened — as were the Barcelona fans. As the captain of the ship, like on the Titanic, I have to be the last to jump. LaLiga is unforgiving. We have scored zero goals and have zero points. But we have to pick ourselves up. We have to get rid of the bad sensations.” — Cadiz coach Sergio Gonzalez

Cadiz: LaLiga’s bottom club aren’t going to find the going any easier in the coming week, with a must-win trip to Real Valladolid (9/16, 3 p.m. ET, ESPN+) ahead before the two-week international break. Can they finally break their dismal run?

Barcelona: Xavi’s side have two games this week ahead of the two-week international break. First up is a tough trip to Bayern Munich in the UEFA Champions League (Tuesday), followed by the visit of struggling Elche (9/17, 10.30 a.m. ET, ESPN+) in LaLiga. Can they close the gap on Real Madrid?