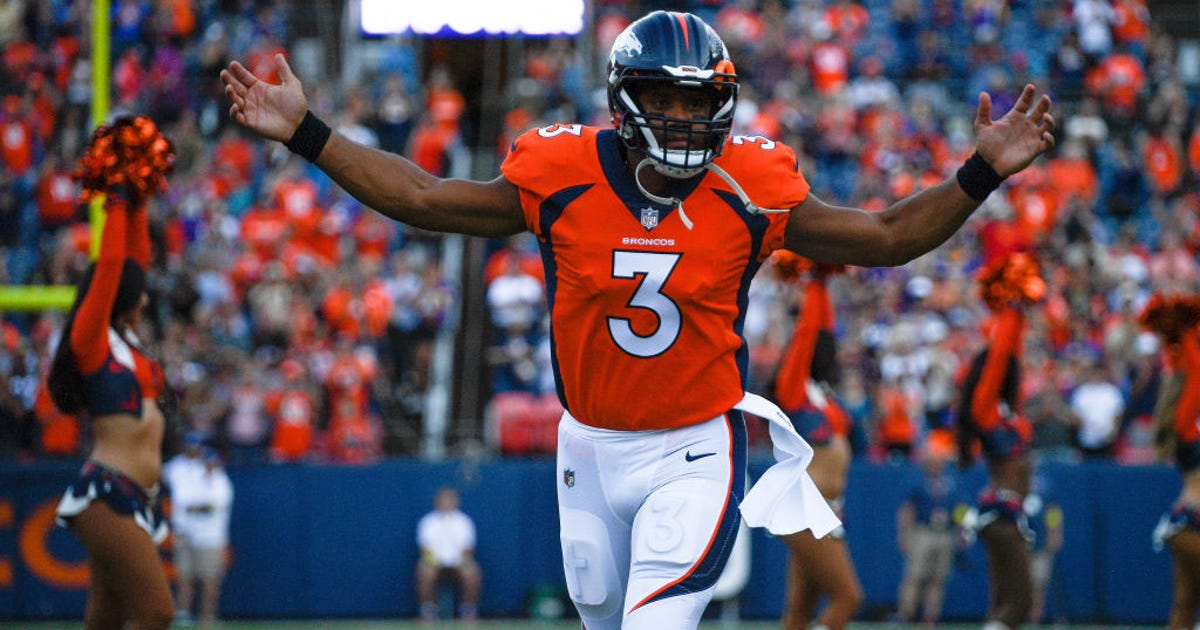 On the first Sunday of the NFL season, the Vikings beat the Packers, the Saints edged the Falcons and the Eagles held on against the Lions. In the AFC, the Chargers won against the Raiders, the Dolphins clipped the Patriots and the Steelers beat the Bengals in overtime in the craziest game of the day. In cross-conference action, the Chiefs looked dominant against the Cardinals, the Giants edged the Titans and the Browns squeaked by the Panthers on a last-second 58-yard field goal by their rookie kicker. On Sunday night, the Buccaneers topped the Cowboys.

Week 1 concludes tonight in Seattle with the Seahawks hosting the Broncos. After playing 10 years for the Seahawks, quarterback Russell Wilson will be on the opposing sidelines in his debut as a Denver Bronco. Taking over behind center for the Seahawks is Jets castoff Geno Smith.

After years calling games on Fox, Joe Buck and Troy Aikman will be in the booth this season for ESPN’s Monday Night Football broadcasts. And the Manning brothers are back with year 2 of the ManningCast, their alternative broadcast on ESPN2 and ESPN Plus. Brothers Peyton and Eli and assorted guests will call 10 Monday Night Football games this season, starting with week 1 in Seattle.

What are my streaming options for NFL games in 2022?

Paying for cable is the easiest solution but not the cheapest. For cord-cutters looking to save some money, NFL football streaming options can get a bit complicated, with games played across three different days and nights each week on different channels and streaming services.

Most NFL games are played on Sunday, with a game each week on Thursday night and another each week on Monday night. On Sundays, games start at 1 p.m. ET (10 a.m. PT) and 4 p.m. ET (1 p.m. ET), with most AFC teams on CBS and most NFC teams on Fox.

As in previous seasons, Monday Night Football games will be on ESPN. In addition, NFL Network will show three international games played in London and Munich this season.

All five of the live TV streaming services carry ESPN and Fox, and all but Sling TV carry CBS. All but DirecTV Stream carry NFL Network. For the games on CBS and Fox, keep in mind that not every service carries every local network, so check each one using the links below to make sure it carries CBS and Fox in your area.

And then there is ESPN Plus, which will have an exclusive game in Week 8 when the Broncos take on the Jaguars in London.

Wait, there’s one more streaming service to consider this year. The NFL is launching a new streaming service for watching games on your phone or tablet — no casting to your TV. In past years, you could do this for free with the Yahoo Sports app, but now you’ll need to pay $5 a month or $40 for the season for the NFL Plus app. With it, you’ll be able to watch every local game on Sunday and the national games on Sunday, Monday and Thursday nights as well as the playoffs and Super Bowl — again, only on your phone or tablet.

Lastly, there’s NFL RedZone, a channel that springs to life each fall and shows live NFL action during the Sunday afternoon games. It pops in and out of the live games and attempts to show each touchdown scored in each game. RedZone is available as an add-on on four of the five major live TV streaming services — all but DirecTV Stream.

Our pick from the last two years remains our go-to choice in 2022.

At $65 per month each, YouTube TV checks all the NFL boxes. Local channels CBS, NBC and Fox are included in many markets, and ESPN and the NFL Network are also included so you can watch Sundays and Monday nights. The next best options are FuboTV and Hulu Plus Live TV; both offer the same channels as YouTube TV for NFL fans, but for $70 a month.

Want to follow your fantasy team with RedZone? That’s available on all three services as part of an add-on. If you’re a YouTube TV subscriber, you can add the $11 per month Sports Plus add-on by clicking on your profile and going to Settings, then the Membership tab. FuboTV subscribers can go into My Profile and choose Manage Add-ons to get its $11-per-month Sports Plus with NFL RedZone offering. And Hulu users can now add RedZone for $10 per month with its Sports add-on.

Both YouTube TV and FuboTV allow three people to watch at once (Hulu allows two live streams) and all three have apps on nearly every mobile device and major streaming platform, including Amazon Fire TV, Google TV, Roku and Apple TV.

While all three are largely similar, we like YouTube TV for its superior DVR — unlimited storage compared with 30 hours on FuboTV and 50 hours on Hulu. We also like YouTube TV because it gives you an option to stream in 4K for an extra $20 a month. FuboTV does, too, with its $80-a-month Elite plan. Keep in mind that only Fox and NBC offer 4K NFL broadcasts; CBS and ESPN do not.

DirecTV Stream offers the main broadcast channels for NFL games, but it starts at $70 per month and lacks NFL Network and RedZone.

Sling TV’s Orange and Blue plan for $50 a month gets you ESPN and the NFL Network, and, in select major markets, Fox and/or NBC, but you’ll still lack CBS. You can also add RedZone for $11 per month with the Sports Extra add-on.

A frequent fan-favorite method of following all the NFL action on Sundays, RedZone is a way to catch every big play around the league. The cheapest road to RedZone is to get Sling TV Blue for $35 per month and add the $11 per month Sports Extra add-on.

This option can also be streamed on a host of devices including iOS, Android, Apple TV, Roku, Chromecast, Amazon Fire TV and web browsers.

Note: If you only subscribe to Sling’s Orange package you won’t be able to get RedZone in Sports Extra. Your base package needs to be either Sling Blue or its larger Sling Blue Plus Orange bundle for you to be able to get RedZone as an add-on. If you choose the latter, the Sports Extra add-on is $15 per month as you will also get additional channels like the SEC Network, ACC Network and PAC 12 Network.

If you mainly plan to watch on a phone, you can also check out RedZone Mobile, which is in the NFL app. This is a separate subscription from NFL Plus and runs $35 for the season (which breaks down to around $7.78 per month for the roughly four-and-a-half months of regular season football). While this is one of the cheapest ways to get RedZone, be aware that — similar to NFL Plus — you will not be able to AirPlay or Chromecast it onto a larger screen and will need to watch on your phone.

Those looking to save some cash might want to check out Sling Blue for $35 a month. While it lacks ESPN, meaning you’ll miss out on Monday Night Football, in select markets you’ll be able to get Fox and NBC. The catch is that those markets are mainly in big cities, so if you live outside one of those areas, Sling Blue might not be for you.

You can also add RedZone through the company’s $11 per month Sports Extra add-on.

Fox broadcasts most NFC games on Sundays, while NBC has Sunday Night Football. CBS, which broadcasts the bulk of AFC games, isn’t included on Sling at all. But an antenna can fill those local channel gaps without a monthly charge.

Budget alternatives for AFC fans: Paramount Plus (or an antenna)

There are some apps that offer CBS’ slate of Sunday AFC games live, including Paramount Plus’ Premium tier for $10 per month. Depending on where you live, however, your local CBS station (and those NFL games) might not be available. CBS offers livestreaming services in many markets; you can check for yourself if your area has live CBS streaming here.

An antenna is another option for getting CBS. And as we mentioned above, an over-the-air antenna connected to your TV provides another option, no streaming or monthly fee required, as long as you have good reception.

In past years, Thursday Night Football games were shown on Prime Video but were also available on Fox or NFL Network. This year, starting Week 2, the games on Thursday nights will be available only on Prime Video, giving NFL fans more incentive than free two-day shipping to sign up for an Amazon Prime account for $15 a month or $139 a year. You can also subscribe only to Prime Video for $9 a month.

What about Sunday Ticket?

For one more season, NFL Sunday Ticket is still largely limited to DirecTV satellite subscribers. While that is expected to change in 2023, those who live in buildings that can’t add a satellite dish can already get a streaming version to watch football starting at $294 for its To Go package for the season, or $396 for a Max package that includes the RedZone channel (a student version is also available at a discount). You can check your address on the Sunday Ticket site. Both packages have a one-week free trial.

The problem here, however, is that even if you’re eligible, it doesn’t include local games. You can only watch Sunday games that aren’t being broadcast on CBS, Fox or NBC in your area. They also won’t be helpful come playoff time — as you’ll need your local stations and ESPN to catch all those games.

For $65 a month, you’ll get all the major football channels with YouTube TV. Plus, RedZone is available for an extra $11 per month. Plug in your ZIP code on YouTube TV’s welcome page to see which local networks are available in your area.

Sling TV’s $35-a-month Blue plan includes NBC, Fox and the NFL Network. Enter your address here to see which local channels are available where you live. NFL RedZone is also available for an extra $11 per month.

Note: This version of Sling TV does not include ESPN. For that, you’ll need to switch to the similarly priced Orange plan or go for the combined $50 per month Orange and Blue bundle. With the combined plan, RedZone is an extra $15 per month.

Those looking for CBS games will be able to stream them on Paramount Plus with its $10 per month Premium tier. You can check for yourself if your area has live CBS streaming here.

Read our Paramount Plus review.

Thursday Night games, starting with Week 2, will be available only on Amazon Prime Video. For millions of Amazon Prime subscribers, the Prime Video channel is already included at no extra cost. But if you’re not a subscriber, it might be worth it to shell out the $9 a month for the stand-alone TV service fee.